There Will Always Be An England (Britpop Divison) Pt. II

by M. Bouffant     at 05:25
No sooner were we ready to put this issue (& ourself) to bed than this popped up on the Daily Mail site. Lily & Amy seem joined @ the hip, as far as attracting the attention of the Daily Mail, & here as well. Must've been quite a night in LDN town. Ah, to be young, silly/stupid & drunk again. Been there, done that, but w/o nearly enough money in our case.

Lily had clearly enjoyed the free bar, and things came to a head when megastar Madonna - who made a surprise appearance to present the Inspiration Award to her pal, interior designer David Collins - got up to make her speech.
Rebel Lily didn't stop talking - extremely loudly - throughout the entire six minutes that Madge was on the mic. 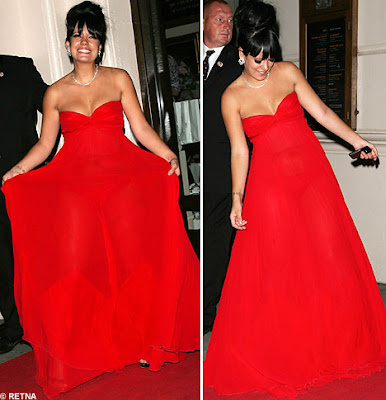 Clearly Lily didn't have enough fun at the GQ awards, so she decided to gate-crash the private - and secret - afterparty of Keira Knightley's movie Atonement in Claridges Hotel.
Lily was staying there last night and headed straight for the ballroom with her pal, TV presenter (and champion sourpuss)
Miquita Oliver.
The pair downed as many free drinks as they could find before deciding to cause havoc in the hotel, while a bemused Keira and boyfriend Rupert Friend looked on.
And who should the naughty pair bump into again but Madonna and Guy Ritchie, who were also at the hotel, trying to enjoy a quiet drink in the bar.
The sours said: “Madonna looked slightly disgusted and left shortly afterwards.” 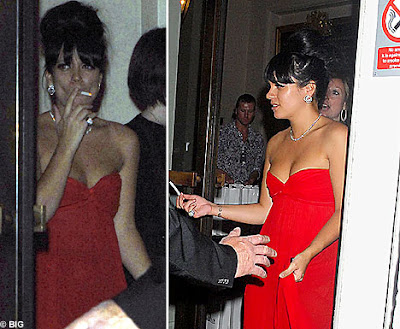 Badly behaved: hellraiser Lily Allen being told off for lighting up next to a ‘No Smoking’ sign. (Both photos & captions from Daily Mail.)