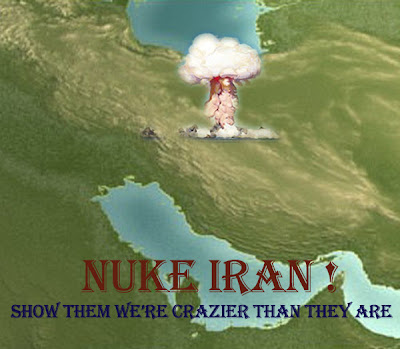 Veep Cheney's "Idiosyncratic Views" have been noticed before. Today the "liberal Eastern Establishment media," in the form of the New York Times & the Washington Post add fuel to the fire. From the NYT, further confirmation:

The language in Mr. Bush’s speech reflected an intense and continuing struggle between factions within his administration over how aggressively to confront Iran. Secretary of State Condoleezza Rice has been arguing for a continuation of a diplomatic approach, while officials in Vice President Dick Cheney’s office have advocated a much tougher view. They seek to isolate and contain Iran, and to include greater consideration of a military strike.

But a belief has been growing in Iran, which administration officials have pointedly not tried to stem, that the Bush administration was considering military strikes against Iran. An Israeli airstrike in Syria last week kicked up speculation in the Iranian press that Israel, in alliance with the United States, was really trying to send a message to Iran that it could strike Iranian nuclear facilities if it chose to.

“If I were the Iranians, what I’d be freaked out about is that the other Arab states didn’t protest” the airstrike, said George Perkovich, vice president for studies at the Carnegie Endowment for International Peace. “The Arab world nonreaction is a signal to Iran, that Arabs aren’t happy with Iran’s power and influence, so if the Israelis want to go and intimidate and violate the airspace of another Arab state that’s an ally of Iran, the other Arab states aren’t going to do anything.”

Think another war can't happen? Think again. Unchastened by the Iraq fiasco, hawks in Vice President Cheney's office have been pushing the use of force. It isn't hard to foresee the range of military options that policymakers face.

The next war would begin with an intense air and naval campaign. Let's say you're planning the conflict as part of the staff of the Joint Chiefs. Your list of targets isn't that long -- only a few dozen nuclear sites -- but you can't risk retaliation from Tehran. So you allow 21 days for the bombardment, to be safe; you'd aim to strike every command-and-control facility, radar site, missile site, storage site, airfield, ship and base in Iran. To prevent world oil prices from soaring, you'd have to try to protect every oil and gas rig, and the big ports and load points. You'd need to use B-2s and lots of missiles up front, plus many small amphibious task forces to take out particularly tough targets along the coast, with manned and unmanned air reconnaissance. And don't forget the Special Forces, to penetrate deep inside Iran, call in airstrikes and drag the evidence of Tehran's nuclear ambitions out into the open for a world that's understandably skeptical of U.S. assertions that yet another Gulf rogue is on the brink of getting the bomb.

But if it's clear how a war with Iran would start, it's far less clear how it would end. How might Iran strike back? Would it unleash Hezbollah cells across Europe and the Middle East, or perhaps even inside the United States? Would Tehran goad Iraq's Shiites to rise up against their U.S. occupiers? And what would we do with Iran after the bombs stopped falling? We certainly could not occupy the nation with the limited ground forces we have left. So what would it be: Iran as a chastened, more tractable government? As a chaotic failed state? Or as a hardened and embittered foe?

It's worth reading all of ret'd. Gen. Clark's piece.
And former L. A. Times reporter Robin Wright (she got out just in time, it appears) now w/ the WaPo, steno graphs anonymously sourced gov't. information about those Iranians & their arming of everybody who looks cross-eyed at the U. S.:

This time, the arms were shipped into the western province of Farah, a vast but sparsely populated area, the sources said, indicating an attempt to find routes less likely to be discovered.

"They're clearly trying to vary their routes and not get caught," the U.S. official said on condition of anonymity because the interdiction has not been formally publicized.

A senior Iranian official called the allegation baseless. "We have no interest in instability in Iraq or Afghanistan. We have good neighborly relations with the heads of state, who have praised Iran recently. Why should we send weapons to the opposition?" the official said on condition of anonymity because he was not authorized by the Iranian government to comment on the allegation.

Iran, a predominantly Shiite Muslim country, has long opposed the Taliban, a Sunni Muslim group with different ideas about society, government and religion. But their cooperation is based on common opposition to foreign, and particularly Western, troops in Afghanistan, according to the United States and officials from other countries in the international force.

We've nothing to add. We are left speechless. And apprehensive.