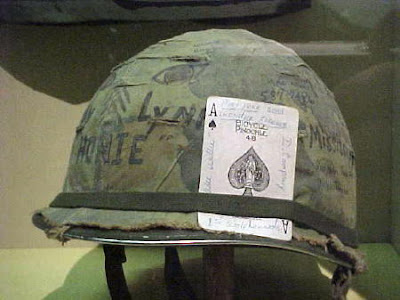 To all the self-righteous buffoons coming by to look at & move your lips over the big words in the items on the Gathering of Eagles beating a Gold Star father & Blackwater USA shooting anything in its way, may we refer you to this article in the L. A. Times, where we see how un-exceptional & disgustingly human U. S. soldiers were in Vietnam, and how the Army did little or nothing about it:

The files are part of a once-secret archive, assembled by a Pentagon task force in the early 1970s, that shows that confirmed atrocities by U.S. forces in Vietnam were more extensive than was previously known.
[...]
Retired Brig. Gen. John H. Johns, a Vietnam veteran who served on the task force, says he once supported keeping the records secret but now believes they deserve wide attention in light of alleged attacks on civilians and abuse of prisoners in Iraq.
"We can't change current practices unless we acknowledge the past," says Johns, 78.
[...]
The documents detail 320 alleged incidents that were substantiated by Army investigators — not including the most notorious U.S. atrocity, the 1968 My Lai massacre.
Though not a complete accounting of Vietnam war crimes, the archive is the largest such collection to surface to date. About 9,000 pages, it includes investigative files, sworn statements by witnesses and status reports for top military brass.
The records describe recurrent attacks on ordinary Vietnamese — families in their homes, farmers in rice paddies, teenagers out fishing.
Hundreds of soldiers, in interviews with investigators and letters to commanders, described a violent minority who murdered, raped and tortured with impunity.
Abuses were not confined to a few rogue units, a Times review of the files found. They were uncovered in every Army division that operated in Vietnam.
[...]
Among the substantiated cases in the archive:
• Seven massacres from 1967 through 1971 in which at least 137 civilians died.
• Seventy-eight other attacks on noncombatants in which at least 57 were killed, 56 wounded and 15 sexually assaulted.
[...]
Staff Sgt. Wilson Bullock told an investigator at Ft. Carson, Colo., that his platoon had captured 19 "women, children, babies and two or three very old men" during the Tet offensive.
"All of these people were lined up and killed," he said in a sworn statement. "When it, the shooting, stopped, I began to return to the site when I observed a naked Vietnamese female run from the house to the huddle of people, saw that her baby had been shot. She picked the baby up and was then shot and the baby shot again."
Gregory Newman, another veteran of B Company, told an investigator at Ft. Myer, Va., that Capt. Reh had issued an order "to search and destroy and kill anything in the village that moved."

This isn't some commie crap from the "liberal" media. It's from U. S. Army documents. Let's hear some more about how noble our warriors are. And how only traitors would ever say anything bad about them. War is not noble or glorious. It's a foolish waste. And those who support & encourage it are, by definition, fools.