Telco Says "Fuck You" To California

by M. Bouffant     at 23:10
(We wouldn't ordinarily bother w/ such an obvious vulgarity as the photo immediately below, but as it turned up, labeled "AT&T.jpg", in our search for the image just below it, and as we'd already determined the title of this item, we thought it à propos.) 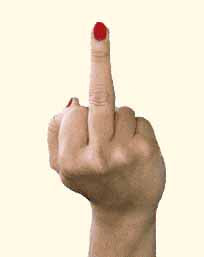 They've already said it to every other state but Nevada. Ma Bell & her split-up, then re-combined offshoots

have been saying it to everyone picking up a phone since A. G. Bell (on certificate below:) 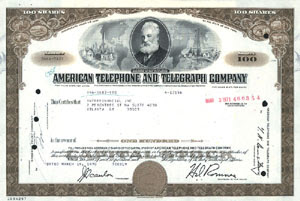 dropped acid in his crotch & whined to his flunky, "Mr. Watson, come here, I need you." Bastard probably wanted Watson to lick it off his lap. Not to mention that AT&T, Google, & every single other corporate "information" provider will cheerfully provide "your" information to any gov't. agency that flashes its tin badge. Often Feds who've put in their time & "retired" from gov't. service are hired to handle "security" for these corporations, but in essence function as arms of whatever agency they were attached to, from w/in the corporation.
From the L. A. Times:

The brief note in customers' bills hardly does justice to the momentousness of the decision. "Service withdrawal," it blandly declares. "Effective September 2007, Time of Day information service will be discontinued."

Times change," said John Britton, an AT&T spokesman. "In today's world, there are just too many other ways to get this information. You can look at your cellphone or your computer. You no longer have to pick up the telephone."

Those of us not in thrall to the on-demand slavery of a mobile 'phone, or who have a computer that's currently, for example, four minutes fast (How the fuck do you set the computer w/o the time recording?) & probably gaining every nano-second, are screwed. Why can't Microsnoft make an OS that can keep time? How is one to set the VCR (alright, Just Another Blog™ is somewhat of a technological Neanderthal, or just too effing broke to buy new crap every other year) or the DVD recorder? Sunny (as hell itself) SoCal is probably going to have brown-outs & black-outs soon, if the extreme heat warnings continue much longer. That means re-setting clocks & recording devices. You could count on the "Time of Day information service" to give you a count-down for resetting crap. Now we're supposed to look @ the fucking cell 'phone (an added expense) & hope it's telling the correct time, then punch in on the remote & hope we're not more than a second off? Bullshit!! M. Bouffant insists on having all chronometry exact to the second.

Let me make this perfectly clear: You fucking people are damn lucky Just Another Blog™ doesn't have access (yet, negotiations w/ Dear Leader Kim Jong-Il are ongoing) to nuclear weapons. 'Cause when we get them, if we have to put up w/ much more of this shit, we won't have any reason to live, & none of you have had any excuse for your oxygen wasting ways for quite some time now. Be warned, capitalist (& otherwise) assholes!! And come & get us, George W(orst) Bush!! We have just as much (if not more) intention of possessing & using nuclear weaponry as those two-bit nut jobs in Iran!! Whatcha gonna do, closet case cowboy? Huh?