by M. Bouffant     at 02:26
Bill Buckley salutes his troops following his loss in the 1965 NYC mayoral election. 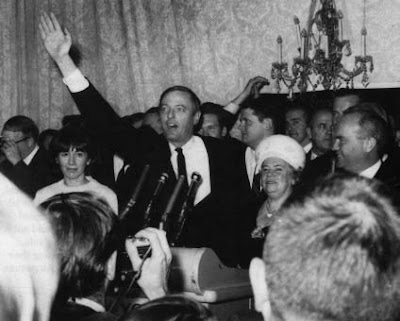 That would be William F. Buckley. Jr. From his syndicated column, Bill explains why Willard "Mittens" Romney is not a "flip-flopper."

We have to imagine that there were public men in the age we speak of who, giving thought to slavery, walked into an epiphany of the kind Gov. Romney claims to have walked into in the matter of abortion. Early utterances by Abraham Lincoln were ambiguous in the matter of slavery, and, of course, the principal draftsman of the Bill of Rights was a slave owner.

Isn’t it an obligation of some kind, in a society that yields to public discourse for judgments on the law, to permit a contender for high office to change his mind on basic issues without incurring the charge of hypocrite or opportunist?

Well, sure, if you're the Republican ex-governor of Massachusetts. Though perhaps not so much if you're a Democratic Senator from Massachusetts, and your epiphany puts you on a different side than Mr. Buckley.