by M. Bouffant     at 00:28
Seeing the date atop the previous item, The Editor was reminded of the death of his father, 38 yrs. ago today. Died drunk driving (Well, drunk enough to cheat me out of $1,000.00 of insurance money, as he was committing a crime.) trying to pass someone on a curve near Yakima, Washington, two days after his mother's funeral. Grim, huh? The Editor thinks whoever who was coming the other way survived. (No digital photo available.)
One other 9 September death: Mao Zedong, 1976. 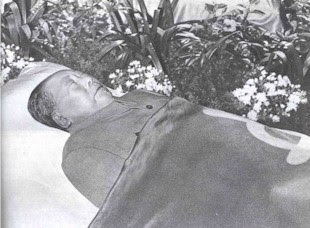