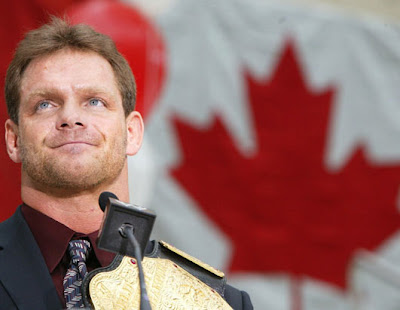 Let's see if we can make it an even ten items published today.
Looks like pro wrassler Chris "The Canadian Crippler" Benoit may have been suffering from a whole shitpile of concussions, rather than steroid rage. As former pro wrestler Chris Nowinski, of the Sports Legacy Institute, remarked on Nightline this evening:

"Right now, I don't know what role it played, but the fact that he became more religious at the end did set off alarms in my head," said Nowinski. "I had heard that Chris placed Bibles next to the body. That actually did raise red flags in my head, because … a few of our prior cases had become very religious,
where they had not been, at the end of their lives."

"We certainly were aware, or have been made aware, of some issues that he was having, from some neighbors — of some strange behavior that was going on," Michael Benoit said. "He had started to wear a rosary around his neck … he wasn't all that religious a person."

A sudden shift toward spiritualty can be interpreted as the result of dementia.