by M. Bouffant     at 00:01
Today is Tuesday, Dec. 1, the 335th day of 2009. There are 30 days left in the year. UPI version of history.
Today's Highlight in History:
On Dec. 1, 1955, Rosa Parks, a black seamstress, refused to give up her seat to a white man on a Montgomery, Ala., city bus. Mrs. Parks was arrested, sparking a year-long boycott of the buses by black residents of Montgomery. 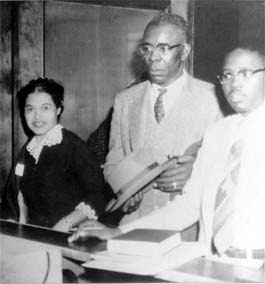 On this date:
In 1824, the House of Representatives convened to decide the presidential election because no candidate had received a majority in the Electoral College. John Quincy Adams was eventually chosen the winner over Andrew Jackson, Henry Clay and William H. Crawford.
In 1891, the game of basketball was invented when James Naismith, a physical education teacher at the International YMCA Training School in Springfield, Mass., put peach baskets at the opposite ends of the gym and gave students soccer balls to toss into them.
One hundred years ago, in 1909, the first kibbutz was founded in the Jordan Valley by a group of Jewish pioneers; the collective settlement became known as Degania Alef.
In 1913, the first drive-in automobile service station, built by Gulf Refining Co., opened in Pittsburgh.
In 1917, the Rev. Edward Flanagan founded Boys Town near Omaha.
In 1919, Lady Astor was sworn in as the first female member of the British Parliament.
In 1921, the Navy flew the first nonrigid dirigible to use helium; the C-7 traveled from Hampton Roads, Va., to Washington, D.C.
In 1934, Sergei M. Kirov, the head of the Communist Party in Leningrad, was assassinated as Soviet leader Josef Stalin began a massive purge that would claim tens of millions of lives.
In 1942, nationwide gasoline rationing went into effect in the United States.
In 1943, ending a "Big Three" meeting in Tehran, U.S. President Franklin Roosevelt, British Prime Minister Winston Churchill and Russian Premier Josef Stalin pledged a concerted effort to defeat Nazi Germany.
In 1944, Bela Bartok's Concerto for Orchestra was premiered by the Boston Symphony Orchestra under the direction of Serge Koussevitzky.
In 1953, the first Playboy magazine was published. Marilyn Monroe was on the cover.
Fifty years ago, in 1959, representatives of 12 countries, including the United States, signed a treaty in Washington setting aside Antarctica as a scientific preserve, free from military activity.
In 1965, an airlift of refugees from Cuba to the United States began in which thousands of Cubans were allowed to leave their homeland.
Forty years ago, in 1969, the US government held its first draft lottery since World War II. [We happily note that, once we were eligible (NOT in 1969!!) our # was 320. You might be reading Just Another Blog From Manitoba™ now, had things been different. — Ed.] 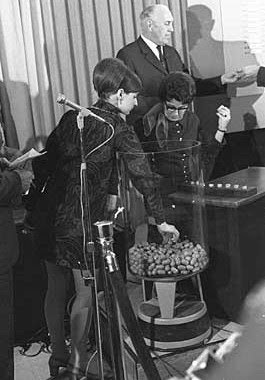 In 1973, David Ben-Gurion, Israel's first prime minister, died in Tel Aviv at age 87.
In 1989, in an extraordinary encounter, Soviet President Mikhail S. Gorbachev met with Pope John Paul II at the Vatican. East Germany's Parliament abolished the Communist Party's constitutional guarantee of supremacy.
In 1990, Iraq agreed to U.S. President George H.W. Bush's call for diplomatic missions to seek a solution to the Gulf crisis but insisted the Arab-Israeli dispute be a part of any bargain.
In 1991, Ukrainians voted overwhelmingly for independence from the Soviet Union.
In 1992, Amy Fisher was sentenced to five to 15 years in prison for shooting and seriously wounding Mary Jo Buttafuoco, the wife of the teenager's lover, Joey Buttafuoco, on New York's Long Island. (She served seven years.)
In 1996, an oil tanker sunk by the Japanese in 1941 was located off the California coast with its cargo intact.
In 1997, a 14-year-old student opened fire on a morning prayer group at a high school in West Paducah, Ky., killing three students and wounding five.
In 1999, President Bill Clinton addressed a World Trade Organization conference in Seattle, where he defended his administration's policies in the face of sometimes violent street demonstrations. An international team of scientists announced it had mapped virtually an entire human chromosome. On World AIDS Day, United Nations officials released a report estimating that 11 million children worldwide had been orphaned by the pandemic.
In 2000, Vicente Fox was sworn in as president of Mexico, ending 71 years of ruling-party domination.
In 2004, Tom Brokaw signed off for the last time as principal anchor of the "NBC Nightly News"; he was succeeded by Brian Williams. Texas Gov. Rick Perry blocked the execution of Frances Newton two hours before she was to be lethally injected for the deaths of her husband and two young children so her lawyers can conduct new tests on evidence in the 17-year-old murder case. (Newton was executed in September 2005.)
In 2005, U.S. Rep. John Murtha, D-Pa., ranking member of the House Appropriations Committee and a military veteran, said the war in Iraq had left the U.S. Army "broken, worn out" and "living hand-to-mouth." Also in 2005, same-sex marriage became legal in South Africa when the country's Constitutional Court ruled that laws banning it were unconstitutional.
In 2006, U.S. President George W. Bush proclaimed Dec. 1 World AIDS Day and urged all Americans to join in the fight against the disease. Also in 2006, the British government decided on a near total indoor public smoking ban in England. Only private homes and hotel rooms were exempt.
In 2007, a methane gas explosion injured 52 miners at the underground Ukraine coal mine where 101 miners died in a blast two weeks earlier.
In 2008, the National Bureau of Economic Research officially declared the US to be in a recession; the Dow industrials lost 679 points to end a five-day win streak. President-elect Barack Obama announced his national security team, including Hillary Rodham Clinton as secretary of state, Eric Holder as attorney general and Janet Napolitano as homeland security secretary; Obama also said that Robert Gates would stay on as defense secretary.
Today's Birthdays December 1: Actor Paul Picerni is 87. Former CIA director Stansfield Turner is 86. Singer Billy Paul is 75.[Billy Paul. 75. Damn! — Ed.] Actor-director Woody Allen is 74. Golfer Lee Trevino is 70. Singer Dianne Lennon (The Lennon Sisters) is 70. Country musician Casey Van Beek (The Tractors) is 67. Television producer David Salzman is 66. Rock singer-musician Eric Bloom (Blue Öyster Cult) is 65. Rock musician John Densmore (The Doors) is 65. Actress-singer Bette Midler is 64. Singer Gilbert O'Sullivan is 63. Actor Treat Williams is 58. Country singer Kim Richey is 53. Actress Charlene Tilton is 51. Actress-model Carol Alt is 49. Actor Jeremy Northam is 48. Producer-director Andrew Adamson is 43. Actor Nestor Carbonell is 42. Actress Golden Brooks is 39. Actress-comedian Sarah Silverman is 39.Actor Ron Melendez is 37. Contemporary Christian singer Bart Millard is 37.
Today In Entertainment History December 1:
In 1950, Sam Cooke joined the gospel group The Soul Stirrers.
In 1956, the Leonard Bernstein musical "Candide," based on the story by Voltaire, opened on Broadway.
In 1957, Buddy Holly and Sam Cooke made their national TV debuts on "The Ed Sullivan Show."
In 1958, the Rodgers and Hammerstein musical "Flower Drum Song" opened on Broadway. Also in 1958, RCA Records signed singer Neil Sedaka.
In 1960, Paul McCartney and Pete Best were deported from West Germany on suspicion of arson after their hotel room mysteriously caught fire.
In 1963, the Beatles' first single, "I Want to Hold Your Hand," was released in the United States.
In 1982, Michael Jackson's "Thriller" album was released. It went on to become the biggest-selling album of all time.
In 1986, singer Lee Dorsey died in New Orleans of complications from emphysema. He's known for the hits "Ya-Ya" and "Working In The Coal Mine."
In 1989, actress Jane Fonda and Tom Hayden filed separate petitions for divorce in Santa Monica, California. Both said the split was amicable. Also in 1989, actor James Woods and Sarah Marie Owen filed for separation in Los Angeles after four months of marriage.
In 1994, rapper Tupac Shakur was convicted of sexually abusing a woman in a hotel room. Shakur was also recovering from gunshot wounds suffered the day earlier after he was robbed outside a studio in New York.
In 2004, Tom Brokaw hosted his last night of NBC's "Nightly News." He had been on the anchor desk for 23 years.
In 2008, actor Paul Benedict, who played English neighbor Harry Bentley on "The Jeffersons," died on Martha's Vineyard, Mass. at age 70.
Thought for Today: "An educated man should know everything about something, and something about everything." — Dame C.V. Wedgwood, English historian (1910-1997).