by M. Bouffant     at 22:07
Der Gropenator carrying the remnants of the California Republican Party on his manly shoulder. 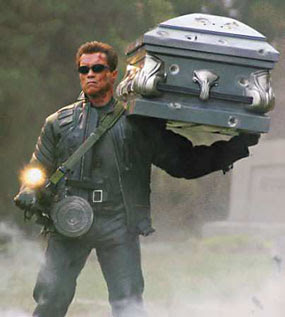 The Cage-liner informs us that the political birthplace of such luminaries as Tricky Dick Nixon & Ronnie "When did the Alzheimer's disease start, and how could you tell, really?" Reagan, the California Republican Party, is doomed. (See also the previous item, where we mention the "collapse" of the "current version of the Republican Party." Talk about prescient!)

Cautioning against an incipient "bunker mentality," he urged the party to follow the lead of Democrats and invite independents to vote in primaries. Otherwise, he said in a clear reference to the summer's prolonged budget standoff, the party will deteriorate to such an extent that "our only remaining power is to say no."

"The Republican Party should stick to its core principles," said Mark Zappa, 48, a promotional business owner from Gilroy who said he was "very disturbed" by the governor's call to open the Republican Party to independent voters as the Democrats do.

"If you have to sway your beliefs just to satisfy society, you don't have a moral basis," Zappa said. "Does that mean you're
marginalized? Possibly."

Just what does a "moral basis" have to do with a political party? Besides the obvious jokes, shouldn't a party's platform be based on policy, laws & programs to be enacted, & the like? If you want "morality," please check w/ your spiritual advisor, not some greedy power-crazed legislator.

To the best of Just Another Blog's™ knowledge, the principled but stubborn Mr. Zappa is not related (closely, anyway) to any better known Zappas.

"They want this party to do something more about climate change than simply doubt it," he said. "If it is the policy of the Republican Party to ignore the great majority of the world's scientists . . . then that is a party at odds with the future."

Schwarzenegger also said voters "want us to work for comprehensive healthcare, not stand in its way."

"We will be on the losing end of history unless we realize that healthcare must be addressed," he said.

But, but...the profits!! Who will think of the profits?

The state party's fortunes have dwindled of late. Its coffers are empty. Members have questioned the competence of party leadership after some dubious hiring decisions. California's Republican congressional delegation has been embarrassed by ethics investigations. And the number of registered Republicans in California has dropped by 370,000 since 2005.

There's a very good reason California Republican legislators have been known as "The Cavemen." Troglodytes is more like it.