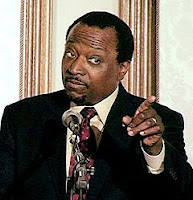 Scores, hundreds, maybe even a few thousand Christo-fascists have been on the edges of their seats for months now, & apparently the "entry" of Freddie Thompson into the horse's-ass race wasn't enough for them (he doesn't seem to darken the door of a church on a regular basis) but the tension has been released, as Alan Keyes has at last thrown his mitre into the ring. He made his announcement on something called Janet Parshall's America last Friday. Let's go to the transcript:

Alan Keyes is a statesman, and there's a marked and distinct difference between a statesman and a politician. He spent eleven years in the U.S. State Department, but he is also a man who has run for the office of the United States Senate a couple of times, and also for the office of President. But, in the meantime, he continues to help mold and shape the culture so we discern and learn the difference between right and wrong, and good and evil — and there is no ambiguity in which side Alan Keyes serves.

There is a certain ambiguity as to which state Alan Keyes would like to "serve," as he has run for the senate in both Maryland (twice, in 1988 & 1992) & in Illinois, where Barack Obama handed him his lunch while beating him like a rented mule in 2004. His previous presidential runs were in 1996 & 2000. Remember? Dr. Keyes is a veritable Harold Stassen. Indeed, he didn't try for the presidential brass ring until Stassen gave up after his 1992 effort.
How does Dr. K. feel about the occupation (It's not a war, damn it!) of Iraq?

KEYES: Well, I think that, in one immediate sense, we can't get away from the truth that we are in a battle for our survival, but I think what we need to recognize clearly is that the problem we face right now on Iraq is actually a problem of morale.

Our forces are over there doing the job they need to do — confronting terrorists, making sure that the terrorists deal with our armed forces rather than come over here and try to kill our unarmed people.

Yes, he's a Harvard graduate. And despite that, he believes that w/o our boys & girls, & middle-aged National Guard & Reservists, those "terrorists" will be swimming across the ocean to kill us. Because we're "unarmed."

KEYES: And some people actually think that we can just withdraw and forget about it, forgetting that we were attacked. And usually, when you withdraw from a war before your enemy stops fighting, you don't call that "withdrawal." You call it defeat and surrender.

That doctrine of terror is the utter opposite of the moral principle our country is based on, that our rights come from God, and must be exercised with respect for the authority of God — beginning with the right to life, which no one, for the sake of any agenda, has the right simply to disregard, where innocent lives are concerned.

Certainly none of the thousands upon thousands of Iraqis killed in or since "shock & awe" were innocent. Not even the children. After all, "they attacked us." Except that they didn't. And if you thought "Christo-fascist" was too strong, or inaccurate, read the the above selection & the following one carefully. Ambassador Keyes has abso-fugging-lutely no interest in the Constitution of the United States. No sir. He's all about the Declaration of Independence, because it refers to his imaginary man in the sky once or twice. Ask yourself if this doesn't represent Christo-fascism:

So, I think it's a moral problem. Do we really adhere to that principle, or not? And if we do, we will have the courage to defend it, and I think it's like a lot of other problems we face. As a matter of fact, just about every major challenge we deal with right now is turning on this question of the moral character, the sense of moral principles, the allegiance to our founding principle, which is the authority of God and the derivation of our rights from God, which is right there in the Declaration of Independence.

I'm sure, in your audience, there are a lot of people who have prayed for revival in America, for a return to the standards of the Declaration, our allegiance to God, our acknowledgment of His existence and authority. I think the mistake that a lot of folks have been making is thinking that somebody else is going to do this, and so we're putting together an effort that's not going to be like anything before, because it's going to be entirely based on citizen action.

Citizen action by duly-deputized Knights of Columbus beating the crap out of godless atheists & Planned Parenthood members is what he's thinking of.
We've wallowed in this pile just about long enough. We'll leave you w/ one more chunk from the big announcement:

PARSHALL: Yes. Alan, let me ask you. In a Keyes presidency, what would the top three issues from your White House be?

KEYES: Top three issues, I think, at the moment, are clear. We have got to restore our respect for Declaration principle by defending life, and making it clear that life begins at conception and must be respected, from that moment, as the will of the Creator, God, because that's what the Declaration establishes as our principle, and what the Constitution says we owe to our "posterity." That has to be clearly done, and clearly established.

Number two would be the restoration of our allegiance to and respect for God's authority, especially when it comes to clear moral decisions like marriage, where we need to restore the sense that the God-given family is an unalienable right. I wrote about this, in articles that I've done over the last several weeks, trying to restore a sense of what our principles really mean, when it come to decisions like this.

And finally, across the board, I would be trying to restore the moral character and morale and sense of our commitment to our basic moral values, starting in the area of national sovereignty, both in terms of our security from terrorism, and especially the security of our borders, and our assertion of the sovereignty of the American people, which our elites have been betraying and trying to throw away.

Certainly someone who went to Harvard, "served in the U.S. Foreign Service, was appointed Ambassador to the Economic and Social Council of the United Nations under President Ronald Reagan, and served as Assistant Secretary of State for International Organization Affairs from 1985 to 1987" (Wikipedia) couldn't be a member of any elite. Also from Wikipedia: "Keyes is a third degree Knight of Columbus and his family is devoutly Catholic."

Skin crawling yet? Try this on: "During his first year of graduate school, Keyes was William Kristol's roommate. (Kristol later ran Keyes' 1988 U.S. Senate campaign against Paul Sarbanes in Maryland.)" Guess that's how Bloody Bill got his job as one-term vice-president Dan Quayle's chief-of-staff, by racking up 38% of the votes.

OK, enough already. But we'll leave you w/ some links:

First, the ambassador's website, Renew America. Don't miss the ghoulish thrill of clicking to "hear Terri laughing" (yes, Terri Schiavo, who'd you think?) & be sure to read columnists like Marie Jon', Kaye Grogran, & Rudy Takala, although we suspect each & every person who types there is, like the three mentioned, highly amusing, & equally punctuation-, grammar-, & syntax-challenged.

And wander over to WorldNetDaily for a bit more on this, dare we say it, miraculous, candidacy, & many links, from that special WorldNetDaily perspective, on Ambassador Keyes, Ph. D. & his miraculous career.

Just Another Blog™ really has to get out of here. The stench of mackerel & the sound of beads being rattled is giving us a headache.

P. S.: If you didn't make it all the way through the Knights of Columbus Wikipedia entry, take a look @ their emblem, & read this: "Mounted on the shield is a fasces with an anchor and a short sword crossed behind it. The fasces is a symbol of authority while the anchor is the mariner's symbol for Columbus." Now who else used the fasces as a symbol of authority?

Point of interest: The fasces is also used to demonstrate "strength through unity", which is the basis for the founding of the Knights of Columbus.

The KofC was founded by a priest who was tired of seeing his immigrant parishoners prematurely dying due to poor working conditions. The discrimination against Catholics, at that time, left these immigrants uninsured and their widows and orphans penniless.

Fr. Mc Givney found a fraternal society to provide for said widows and orphans on the principle of "strength through unity", some 125 years ago.

There's no bogeyman under the bed here. The symbol celebrates that principle.

The Editor Replies:
Well, we're just poking a little fun at Alan Keyes, who is asking for it. When researching, we found plenty of uses of the fasces right in the United States Congress. And no matter the founding principles of the organization, "strength through unity" usually leads to "domination of the brain-daed by conformity." The Knights haven't really been known as a force for social progress recently. We did link to the KofC Wikipedia entry (twice) so anyone wanting further, less hyperbolic info could certainly have gone there.

Thanks for your interest, nonetheless.