Bestest 5 September B-Day Of Them All!! 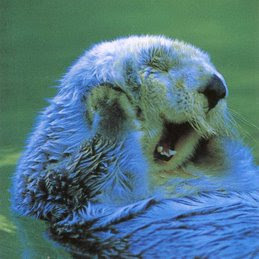 Internet buddy (from the world of commenting) D. Sidhe also celebrates today. Doghouse Riley apparently broke the news, World O' Crap picked it up. Well, maybe D. herself broke it, yesterday, but she just mentioned it in passing. We, as usual, are late to the proverbial party, but we like sleeping 'til 1400 every day! (When we looked @ Lady Insignificant yesterday the new post title was so similar to the previous one we didn't actually notice it was new.) Makes us wonder if it was yesterday, or if she just got presents early. Though she's got plenty on her mind, sounds like she's enjoying herself. Choc-o-lat-l, as the Aztecs or whoever pronounce it.

No, she's not a typing otter, but that's the only picture on her site. Quite the woman of mystery, no year available either, but it's really nobody else's beeswax. Many happy returns (Still don't know what that means. Returning your gifts for cash?) & hope all stays on an even keel, for a long time.
Not that The Editor believes a word of it, even if he is one, but Virgos is teh best! Edsels, On The Road, Peabody, Bob Newhart, Raquel Welch (And Sophia Loren, we think. Dating ourselves much?) only prove it.

How do you know I'm not a typing otter?

Thanks for the good wishes, and no, I'm still not telling anyone how old I am. And while I am a Virgo, I am as completely un-Virgo as you could imagine. The day I found that out is the day I abandoned astrology as a bad joke.

I did get the presents early, since I don't live near anyone who likes me and it all depends on the postal system.

Plus, Sophia Loren has always been hot. Age doesn't enter into it.

The Editor Responds:
It was just a (possibly invalid) assumption. If you are a typing otter I'm really impressed. And I wasn't trying to weasel your age out of you. I chose not to put my birth date & whatnot in my Bugger™ profile 'cause it would automatically post the astro sign. Never believed that stuff, tho' an ex "did my chart" once & it was surprisingly accurate. Maybe she left out the bad stuff. And I only heard what I wanted.
Sophia Loren is as hot as ever. I checked to make sure she was a Virgil too, & current hot was confirmed.
Lillie sends a hiss & growl to Cypress before running & hiding.