The CIA, Jesuits, The Pope, the Sovereign Military Order of Malta
(& Castro)

by M. Bouffant     at 15:13
As Buffalo Springfield (that's "B. S." for short) sang so long ago: "Paranoia strikes deep/Into each heart it will creep." Our recent inquiries into Blackwater, its founder, & some of the affiliations of some of its executives have lead us to the somewhat overwrought Aftermath News, where we found this:

Hence, like Hitler, Stalin and Osama bin Ladin, Castro is just another controlled-opposition asset of the Vatican whose mission, should they decide to accept it (and they have) is to destroy the United States of America by orchestrating massive global opposition to the US from both within and from the world at large.

But really, we just wanted to share this photo of Pope Hitlerjugend I & the Grandmaster and Prince of the Sovereign Military Order of Malta, Andrew Willoughby Ninian Bertie, in full drag. There's another one of the harmless sounding Prince Bertie, who is, according to Aftermath News, Queen Elizabeth II's cousin (any LaRouche fans out there?) shaking hands w/ Castro @ the linked site. 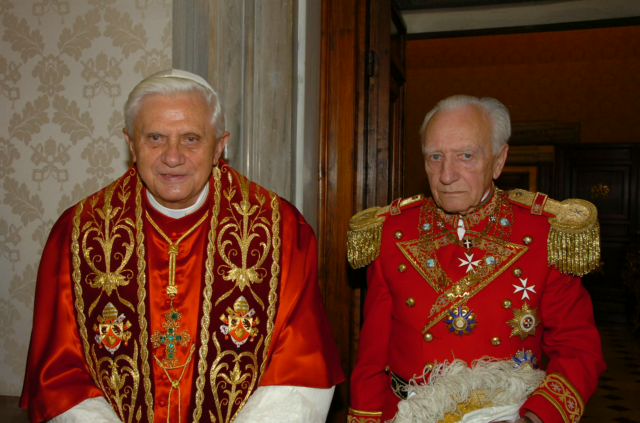