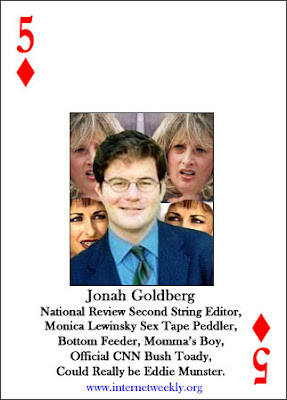 Shorter Jonah Goldberg: Osama Bin Laden lives in a fantasy world where he creates his own reality, even though he's incompetent & can't pull off a successful attack. But I won't mention George Bush & his "reality-creating" incompetence. Oh, & if we pull out of Iraq, Bin Laden will really start to think he's a bad-ass, and might do something naughty.

Let's pull a quote just for the hell of it:

Many Democrats too have been grudgingly breaking from their base's otherworldly narrative of late, though they continue to insist that a "political solution" can be had in Iraq without a concomitant military one. Even the Sunni insurgents are coming to grips with the fact that Al Qaeda doesn't have Iraq's
best interests at heart.

Ah, now the Democratic "base" has an "otherworldly narrative." Few narratives are more "otherworldly" (& rapidly changing) than that of Bush/Cheney/The Project for a New American Century. A brief recap:

• "Every ten years or so we have to throw some crappy little country against the wall to prove to the world that we mean business."

• "Saddam Hussein is a thug w/ WMDs who's terrorizing his own people."

• "We can't let the smoking gun be a mushroom cloud."

• "We'll bring democracy to Iraq, inspiring other nations and ushering in a new age of peace and prosperity."

• "We're fighting them there so we don't have to fight them here."

• "If we withdraw now, there'll be a bloodbath."

There are a few others, but they've mercifully slipped our mind. Jonah, could you remind us just who it is that has "a dizzying sense that they were living in a supernatural world, in which reality knelt before faith?"

And while you're explaining that (good luck) could you throw in an explanation of the "military solution" the United States is going to achieve in a sectarian civil war, in a "nation" that was a drawn up to maximize the power & influence of an imperial power (the United Kingdom)? By staying there in the line of fire like cops trying to stop a turf war between the Bloods & Crips? The "political" solution won't come until the Sunni & Shia are sick & tired of killing each other. And considering this particular schism has been going on for the last 1300 or so yrs., is that the new timetable for withdrawal?

If these fools will admit that the war portion of their sad little adventure has been over since late spring of 2003, and everything since has been an occupation, it might be easier for them to leave w/ the "honor" they continually babble about. Not they had any "honor" to begin w/.