Blackwater contractors, shown in 2005, have an arsenal of helicopters, turreted armored vehicles and automatic weapons at their service.
(Marwan Naamani/AFP/Getty Images) 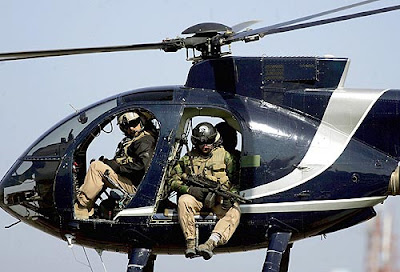 Leading U. S. newspapers on the private security "incident" in Baghdad.

The swift response to Sunday's deaths marked Iraq's boldest step to assert itself against foreign security contractors who have long been accused of racing through Baghdad's streets and firing without restraint at anyone they see as a threat. It also cast a focus on the continued lack of control by American officials over heavily armed private security contractors, at least 20,000 of whom supplement the U.S.-led military forces that invaded Iraq in March 2003.
[...]
Among fellow security companies in Baghdad, Blackwater is often disliked and even feared. "They are untouchable. They've shot up other private security contractors, Iraqi military, police and civilians," said one security contractor, who declined to give his name because of the sensitivity of the issue.
One contractor described an incident three weeks ago in which a four-vehicle Blackwater convoy pushed through a crowded Baghdad street and pointed a gun at his team, even though they waved an American flag -- an indicator used by security contractors to identify themselves to one another.
There have been several fatal shootings involving Blackwater since late last year. On Christmas Eve, a Blackwater employee walking in the Green Zone stopped by an Iraqi checkpoint and, after an argument, fatally shot an Iraqi guard for Vice President Adel Abdul Mehdi, said an Iraqi official and a U.S. diplomat.
Interior Ministry spokesman Khalaf said his government was still investigating the fatal shooting of an elderly man who was speeding by a Blackwater convoy earlier this year.

At a news conference, an angry Maliki said North Carolina-based Blackwater, which has nearly 1,000 employees in Iraq, was also responsible for six similar shootings since being hired by the U.S. State Department to guard its diplomats after the American-led invasion of Iraq in March 2003."This crime has inflamed contempt, hatred and anger both from the government and the Iraqi public," Maliki said. "Hence, it is important that this company's activities be frozen and the American Embassy invest in the services of another one." Maliki reiterated that a preliminary investigation by the Iraqi government found that a Blackwater security detail had fired without provocation Sunday at a traffic circle in Baghdad's Mansour district. As of Wednesday, 11 Iraqi citizens had died as a result of the shooting, Interior Ministry spokesman Brig. Gen. Abdul Kareem Khalaf said."This company should be punished," Maliki said. "We are not going to allow it to kill Iraqis in cold blood."
[...]
Private security contractors are also beginning to draw criticism from Congress. Rep. Henry A. Waxman (D-Los Angeles), chairman of the House Oversight and Government Reform Committee, has announced plans to hold hearings on
Blackwater and the Bush administration's use of private security contractors in war zones. Waxman said the hearings would probe the U.S. government's "excessive reliance" on such contractors.
He also has accused a top State Department official of blocking investigations of fraud and waste, including a Justice Department inquiry of charges that a firm identified as Blackwater may have smuggled weapons into Iraq.

The shooting has inflamed deep-seated frustrations with Blackwater among Iraqis, many of whom view the company's contractors as highly paid bullies with no respect for the citizens and customs of the country where they work. Iraqi officials were quick to speak out after Sunday's incident, and the State Department suspended all ground travel outside the Green Zone for its diplomats.
[...]
A preliminary report from Blackwater indicated that Sunday's violence began when a State Department motorcade was ambushed, but Maliki and other Iraqi officials disputed that account. Government spokesman Ali al-Dabbagh said an initial probe shows that the guards opened fire when a car failed to stop at a police officer's command and pulled into traffic. The
gunfire killed as many as 28 people, including a couple and their infant, he said.

Lots more, from the WaPo:

"The Iraqis despised them, because they were untouchable," said Matthew Degn, who recently returned from Baghdad after serving as senior American adviser to the Interior Ministry. "They were above the law." Degn said Blackwater's armed Little Bird helicopters often buzzed the Interior Ministry's roof, "almost like they were saying, 'Look, we can fly anywhere we want.' "
[...]
Blackwater's conduct at times inflamed tensions inside the Interior Ministry, Degn said. On May 24, Degn was evacuated from the building after an armed standoff between Interior Ministry commandos and Blackwater guards, who had shot and killed an Iraqi driver outside the gates. U.S. and Iraqi officials feared the incident might lead to retaliatory attacks against Americans.
"They are part of the reason for all the hatred that is directed at Americans, because people don't know them as Blackwater, they know them only as Americans," said an Interior Ministry official who spoke on the condition of anonymity because he feared for his safety. The official,
interviewed before Sunday's incident, said, "They are planting hatred, because of these irresponsible acts."
[...]
"Blackwater has no respect for the Iraqi people," the Interior Ministry official said. "They consider Iraqis like animals, although actually I think they may have more respect for animals. We have seen what they do in the streets. When they're not shooting, they're throwing water bottles at people and calling them names. If you are terrifying a child or an elderly woman, or you are killing an innocent civilian who is riding in his car, isn't that terrorism?"
Ann Exline Starr, a former Coalition Provisional Authority adviser, said she traveled in Iraq first with a military escort, then with guards from Blackwater and another State
Department-contracted security firm, DynCorp International, as security in Iraq deteriorated. The shift was startling, she said. The soldiers drank tea and played cards with the Iraqis. The security contractors, on the other hand, moved more aggressively, their only focus protecting Exline Starr.
"What they told me was, 'Our mission is to protect the principal at all costs. If that means pissing off the Iraqis, too bad,' " she recalled.

And from the NYT:

Another NYT piece on Maliki's press conference here. Pretty well covered in the LAT & WaPo articles, so no excerpts.

Wired's Danger Room has a few words too.

You bet your ass the above selections were cherry-picked to make Blackwater™ look as bad as it is. Feel free to click on the "Old Media" stories for the other side's responses, which consist of platitudes such as "legal & appropriate," "investigations are ongoing," etc., and the usual refusals to comment.

And remember: Blackwater & its ilk will be in American towns & cities before you know it, providing "security" @ polling places, keeping you away fromprotecting your "elected" officials, and doing all sorts of things that sworn police officers can't or won't do. All under "special operating agreements." Republicans: Bringing libertarian "privatization" & Iraqi-style "democracy" to these United States. Just Another Blog™ just can't wait.

This is the most fully Korporatized war in history. The mind reels at the mentality necessary to put as many private contractors in the war as American service personnel.
P.

The Editor Concurs:
Well, the Republicans have to get money into the hands of their financial backers somehow.