Into The Wild Blue, w/o a Net or 'Chute 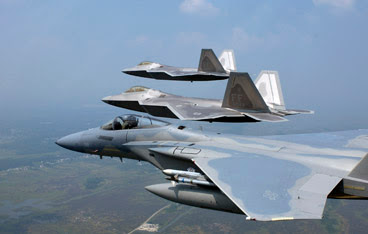 Just Another Blog (From L. A.)™ stands behind no "web log" in digging the USAF, 'cause we like fast planes & missiles & stuff (not people, just stuff) blowing up. So when the Google™ news feed brought this to our attention, via Wired's "Danger Room," we were both saddened & amused, because if there's one thing we like more than things going fast & blowin' up, it's schadenfreude, baby. 'Specially if it's 'cause some dimbulb who should've known better "screwed the pooch," as they say in the AF.

September 21, 2007— The Air Force’s attempts to fund replacement of its aged aircraft fleet by cutting personnel is failing, and if Congress and the White House don’t provide an infusion of cash soon, the service will no longer be able to win wars, Air Force Secretary Michael Wynne declared.
[..]
The Air Force’s older fighters aren’t up to defeating a modern air defense system or modern foreign fighters, Wynne said, and in a fight with Venezuela or Iran, such aircraft would probably be shot down. “No [USAF] fourth-generation fighter would be allowed into war over Tehran or over Caracas, once they buy what the Russians are selling them,” Wynne said. He noted that as far back as 1999, only stealthy B-2s and F-117s were actually allowed to overfly the murderous air defenses around Belgrade in operation Allied Force, and foreign air defense systems have improved dramatically since then.

Tehran we've heard about. Now Caracas is on the target list too?
More @ Danger Room, & they're linking like crazy. But this is our favorite part, 'cause we like the Navy & Marine Corps best of all, what their being a complete fighting force & all that (The Army? Well, tanks are alright, but there's a lot of walking & stuff involved.):

And don't forget the Navy. With a fleet of more than 20 mobile airfields (aka "aircraft carriers") boasting a mix of choppers, radar planes, the nation's only fast tactical jammer jets plus the affordable, flexible F/A-18E/F Super Hornet with a brand-new super-smart electronically scanned radar, these days the Navy is a better air force than the Air Force.
The only thing it doesn't do that the A.F. does is heavy airlift and heavy aerial tanking. So when the Air Force disbands out of despair, hopefully sometime next year, I would propose transfering those missions to the Navy ... and giving the Air Force's Predator drones to the Army, which would probably make better use of them anyway.

Um, does Wynne recall that an F-117 was brought down during the Kosovo war? I'm sure the F-22 is more capable, but if the defenders throw enough ordnance up into the air, F-22s and F-35s will be shot down, too.

Ah, well. This is is the Air Force that managed to convince many Congress that the -117 was a fighter.

I hope McArdle extands her dilletantism to military affairs. Fun!

Der Editor Sez:
We can only hope, but it would probably be further inane droning w/ statistics, not stuff blowing up & going high & fast.