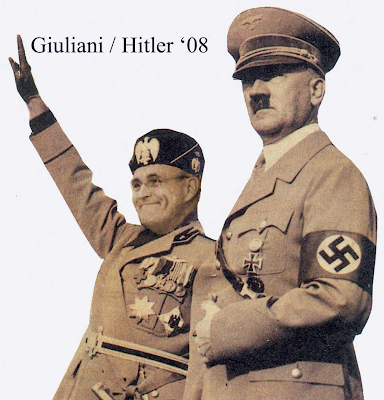 A commenter @ Jihad Watch, in response to the Bin Laden video:

I have no doubt he is in Iran. The Iran & Hezbollah complicity in 9/11 is now undeniable. Bin Laden has undoubtedly received medical care and safe haven inside Iran. It all comes down to Iran. But will our commander-in-chief gather courage to take it on? The only man among all presidential contenders is Rudy Giuliani. For the sake of this country and the world we desperately need him in the White House. Vote for Rudy and pray it is not too late.
Ruslan Tokhchukov, EnragedSince1999.

Uh,...yeah, because a fanatic Sunni would be a perfect fit in a country run by fanatic Shi'a. That's why 15 of the 19 high-jackers were Iranian. They weren't? Well, that proves it then. Those Hizbullahs & Iranians are so devious.

P. S.: Ruslan, you think you're bad? Just Another Blog™ has been "enraged" since the early '60s. But we're still not crazy enough to vote for Rudy.