by M. Bouffant     at 04:20
We've no idea of Edsel Ford's politics, though the apple doesn't fall far from the tree, but let's give him (on the left) a break. However, Charles Lindbergh (center) & Henry Ford (right) were two of Hitler's biggest fans here in the United Snakes. 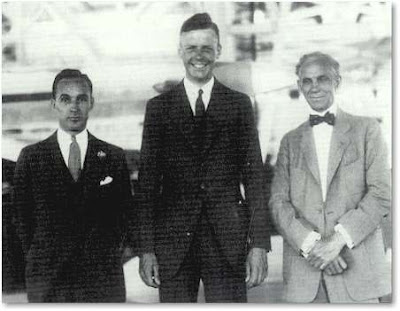 We go to the local fishwrapper again:

When Ford introduced the Edsel -- on Sept. 4, 1957 -- it was hailed as a car of the future. Named for Henry Ford's son Edsel, it offered powerful engines (including a 345-horsepower V8) and advanced technology, including push-button gear-shifting and self-adjusting brakes.

Despite generally positive reviews and a splashy launch campaign that featured Bing Crosby, Louis Armstrong and other icons of the era, the Edsel was a nonstarter with buyers.

Happy Birthday to the New Coke© of its day. It's now getting its revenge. Its production run was 110,000, an estimated five to six thousand are still on the roads, & the prices are astronomical. And poor Edsel Ford. Bad enough to be Henry Ford's only spawn, but then they name a car that became a joke after you. (Though a bit o' research indicates the original, human model died in 1943, beating his father to the Great Beyond by just under four years, unless Wikipedia is lying to us again.)
Plenty of photos @ The Times & dig the TV ad & the intro from "The Edsel Show," w/ Der Bingle, Ol' Blue Eyes & Satchmo. Whores.