by M. Bouffant     at 11:07
Below: After leaving Fresno, McCain arrives in much cooler Santa Barbara yesterday. Photo: LM Otero/AP 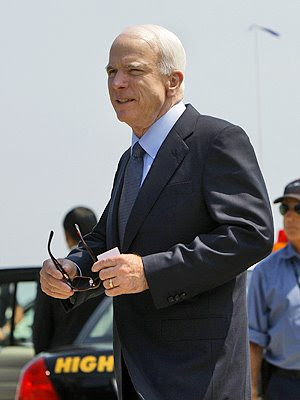 John Sidney McCain III (as you can tell from his "man of the people" name, he's no elitist) proposed yesterday a $300 million "prize" to whomever develops a truly functional electric battery for use in automobiles, allegedly eliminating the need for foreign oil. (Of course, the generation of electricity is often accomplished by burning foreign oil, but we won't dwell on that.) Just one problem: No matter how many perpetual motion machine developers or other All-American tinkerers are hard at work in their basements & garages

"In the battery business, you need to spend $100 million just to get warmed up," said David Vieau, chief executive of battery maker A123 Systems, based in Watertown, Mass.

"We are the country of Edison, Fulton and two brothers named Wright," he said at a town hall event at Fresno State University's Satellite Student Union. "Think of all the highest scientific endeavors of our age: the invention of the silicon chip, the creation of the Internet, the mapping of the human genome."

OK. Fulton took the already existent concept of the steam engine & threw one in a boat. The Wright Bros. applied already known principles to a wood & canvas construction, combined w/ the already extant gasoline engine. Not exactly inventing new technologies there. Edison, well, he didn't exactly discover electricity either. "90% perspiration, 10% inspiration," remember? And he tried many different filaments before finding one that worked. Trial & error, really.

Then Big John refers to the big shit of "our age." Silicon chips, the Web of evil, lies & deception (we're proud to be even a tiny part of it, by the way) & human genome mapping. None of those were developed in a bicycle repair shop, let alone by some guy or gal in the garage.

Offering a prize? Really. How about a big tax on oil co. profits to fund serious, high tech research into functional batteries. And let's leave the automobile & oil/"energy" cos. the fuck out of it, because their corporate cultures are so stuck on essentially 19th century technology & attitudes it would be a waste of time & effort. They all have enough money to start any research they want, & their records so far have been dismal. Not that the electric car isn't 19th century technology itself.

Battery-powered electric vehicles are not a new idea. A century ago, at least half a dozen manufacturers made electric cars, and the first car to break the 60-mph barrier was powered by electricity. But with improvements in the gasoline engine, the technology was shelved. Electric cars returned in the mid-1990s as car makers produced them to comply with California laws mandating emission-free vehicles. Those programs were soon abandoned, with General Motors, the most active participant, producing scarcely 2,000 of its EV1 cars. It recalled the last models (which were leased, not sold) and by 2003 had finished destroying them. Now, with gasoline prices soaring, GM, Toyota, Nissan and Mitsubishi have all pledged to bring battery-powered cars to market in the U.S. between 2010 and 2012.

Oh yes, can't fool them for long. Produce a few thousand, then take them back & destroy them. That's why Detroit remains the world leader in car sales, quality, reliability & innovation.

But all it'll take is some good ol' fashioned American ingenuity. And a few billion in venture capital. That $300 mil is quite the incentive.