American Dream Over? Not Soon Enough for Some

by M. Bouffant     at 12:01
The right wing blog-o-sphere is having another swooning fit. Get out the fainting couches. You know how they are. Anything implying something other than a rose-colored future is "liberal bias."

Here's what they're swooning over, a report on pesky poll figures from AP reporters Alan Fram & Eileen Putman.

The can-do, bootstrap approach embedded in the American psyche is under assault. Eroding it is a dour powerlessness that is chipping away at the country's sturdy conviction that destiny can be commanded with sheer courage and perseverance.

Here's a Rabid Weasel foaming at the keyboard.

The article in question is a thoroughly slanted and emotional piece of crap by Alan Fram and Eileen Putman, passed off as an objective news report.

Fasten your seat belts. This could very well be the most egregious example of liberal media bias ever.

For starters, even the title and subheading are loaded with subjectivity:

Everything Seemingly Is Spinning out of Control / Out-of-control weather, gas prices, economy chip away at American self-confidence

Are you f'ing kidding me??? First of all, I'm no journalism major, but how can you use a word like "seemingly" in the body, let alone title, of an objective news story?

Another idjit checks in @ BizzyBlog. ('Zat like one of those Fisher-Price© Bizzy-Boxes™ for three-yr.-olds?) This is an exercise in paranoia of the first water.

Then the Disheartened Duo get to the real purpose of their piece: to convince us, now that we’re all completely miserable, that the only solution is a change in which party controls the White House (bolds are mine):

American University historian Allan J. Lichtman notes that the U.S. has endured comparable periods and worse, including the economic stagflation (stagnant growth combined with inflation) and Iran hostage crisis of 1980; the dawn of the Cold War, the Korean War and the hysterical hunts for domestic Communists in the late 1940s and early 1950s; and the Depression of the 1930s.

“All those periods were followed by much more optimistic periods in which the American people had their confidence restored,” he said. “Of course, that doesn’t mean it will happen again.”

Each period also was followed by a change in the party controlling the White House.

By the way, those familiar with the Venona Papers and the work of M. Stanton Evans know that there is a better word to describe the “hunts for domestic Communists in the late 1940s and early 1950s.” The word is “necessary.”

Yep, about as "necessary" as invading & occupying Iraq. Oh, excuse us, we forget that was vital to various oil cos. & contractors. And because history indicates that after trying times the party in the White House changes is not the most sweeping endorsement of Sen. Obama. Though Sen. McCain being Junior Bush, jr. is hardly encouraging to anyone hoping for change.

Another note: The reason Congressional Democrats are less popular than lame duck Bush is that the Dems, due to their own sheer cowardice & Republican obstructionism, haven't been able to cut off funding for Bush's elective, etc., war. If they'd been able to accomplish what they were elected for, the popularity polls would be telling an entirely different story.

Just for added fun, here's weenie Don Surber, a favorite of the Sadly, No! staff.

What I cannot understand is why AP sent out this Alan Fram/Eileen Putman analysist[sic]-feature-stream-of-consciousness-editorial called “Everything seemingly is spinning out of control.”

Yes, while analyzing the AP story, & backing up his version of how swell everything is, Don can't spell. 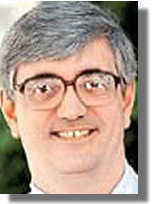 But he has a firm grasp of...the truth, as evidenced here.

90% of Americans have health insurance. (300 million minus 45 million — a third of whom are illegal aliens making the net uninsured around 30 million.)

Wars without end rage in Iraq, Afghanistan and against terrorism?

Actually, Iraq is tamping down, but Afghanistan has had war since the Soviet invasion 30 years ago and the jihadist terrorism has been around since the Munich Olympics in 1972. We’re working on ending both.