by M. Bouffant     at 13:12
Below: Mr. Serious. We wish this crummy library computer had even MSPaint on it, as there is much blank empty space to the late Mr. Russert's right, which (to us) screams to be filled w/ something. Photo: Alex Wong/Getty Images 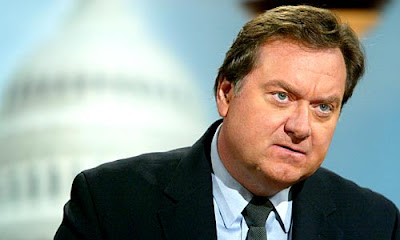 Although some have sympathy for the dead, & for those who survive them, we're cold-hearted here, as well as lazy as all get out. So for "our" last words on the subject, we'll turn to the L. A. Times again. (Please remember, we no longer have the luxury of spending 16+ hrs. a day on the webs of deceit & fabrication, searching for ideas or buffoonery on which to comment, as the up to 4.5 hrs. a day available to us on those webs allows only for checking e-mail & then wasting the rest of our time compulsively typing & retyping this mess you're reading. Once we stop being depressed & murderous/suicidal, we'll work on the anal retention issues. In the meantime, we absorb the dead-tree Times on our bus ride to adult day care for the ill in the head, & while waiting for breakfast at adult day care for, etc. We realize no one else under the age of 65 reads the Times anyway, so we'll continue to pretend we're doing all concerned a favor by picking the very best parts & passing them along.)

We'd planned to say only: "This is all you need to know about Tim Russert:" & copy & paste this:

Meet the Press" was "our best format," she said, where the administration could reliably "control the message."

But while looking for that, we came across an expansion on the theme by Tim Rutten, who is, we believe, the Times' "media critic." We actually believe that "criticism" should come out of the barrel of a gun, Chairman Mao-stylee, but we'll just have to settle.

Watching the cable news networks in the hours after his death, one was struck by the outpouring of admiration and affection from across the political spectrum and from journalistic colleagues of every sort. It was impossible not to be struck -- once again -- by just how incestuous and claustrophobic the Washington-based nexus of politics and journalism has become.

Thus, in all that gush across four networks in dozens and dozens of voices, hardly a word was spoken concerning Russert's role in the recent trial of Vice President Dick Cheney's former chief of staff, I. Lewis "Scooter" Libby. That's odd because Libby's conviction on perjury and obstruction of justice charges was, in some large part, based on Russert's testimony. Like former New York Times reporter Judith Miller, Russert was one of the high-level Washington journalists who came out of the Libby trial looking worse than shabby.

Libby testified before the grand jury investigating the leak of CIA agent Valerie Plame's identity that he first learned she worked for the intelligence agency from Russert during a phone call on another matter. Russert took the stand to contradict Libby only because he'd been subpoenaed -- a summons he and NBC had strenuously resisted on grounds of journalistic privilege.

As it emerged under examination, however, Russert already had sung like a choirboy to the FBI concerning his conversation with Libby -- and had so voluntarily from the first moment the Feds contacted him. All the litigation was for the sake of image and because the journalistic conventions required it.

If Russert's legacy stands for anything, it's that journalists have an obligation to preserve as complete a record as possible -- and to hold those responsible for that record accountable. In the outpouring of grief, affection and fellow-feeling that followed his sudden death, that didn't happen. Perhaps that's understandable under the circumstances, or perhaps it's another insight into the limitations of the sort of "insider" journalism of which Russert was an exemplar.

So there. Speak ill of the dead? Of course! They don't care any more. And we never did.