The People Speak (Or Type) 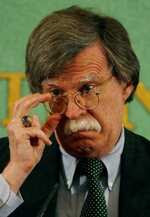 In response to the John Bolton op-ed piece we dealt w/ earlier, the masses have responded in the pp. of the Times itself. Our favorite:

Bolton may or may not be correct about Nikita Khrushchev's assessment of John F. Kennedy after their first meeting. Interestingly, Bolton conveniently ignores the fact that if Kennedy had listened to Bolton's neocon predecessors, especially Air Force Gen. Curtis LeMay, we would have initiated a nuclear conflagration. But let's stick with the roaring success of Iraq and our non-diplomatic, preemptive posture. It's worked so far, and at a cost of thousands of U.S. and Iraqi casualties, along with a few hundred-billion dollars and counting.

Couldn't have put it better ourselves. (Apparently weren't able to, either.)