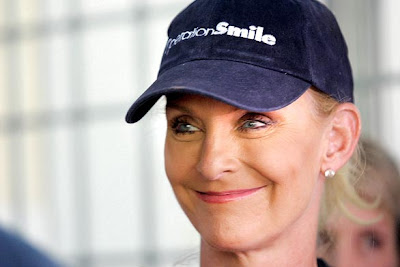 From the very front page of the newspaper that only the finest families in Southern California use to line their cat pans & bird cages comes the tale of Cinderella Stepford Hensley McCain, the beer heiress whose family business may cause some conflict if (Fat chance!) her hubby John were to win the presidency.

A close look at Hensley shows that the company has opposed changes that critics of the beer industry say were intended to help Americans drink responsibly.

McCain has avoided problems in the Senate by recusing himself on alcohol issues, according to executives at the Distilled Spirits Council, the liquor industry's trade association."Sen. McCain has been very, very fair to this industry," said Frank Coleman, senior vice president for the council. "He stays an arm's length away from issues that benefit the family business."

Already causing problems, if he has to recuse himself from law-making. And may cause problems w/ the "clinging to guns & gawd" base, as well.

For some, abstinence -- and a disdain for the industry -- is religion-based. Leaders of the Southern Baptist Convention, which has more than 16 million members, expressed "total opposition to the manufacturing, advertising, distributing and consuming of alcoholic beverages" in the church's most recent resolution on the matter."

I am sure for some individual Southern Baptists, [the McCain family's involvement in the beer business] would be a concern," said Roger S. Oldham, vice president of Southern Baptist Convention relations.

Damn, those suckers have some nerve, don't they? After they get prohibition restored, will they put an end to high school dances? (Many Babtiss are opposed to dancing as well. It's horizontal fucking, you know.)

Below: Singing "Gawd Bless America" at the ball game. That John is a shrimp, isn't he? 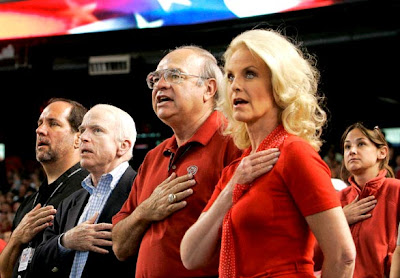 Cindy McCain holds the title of company chairwoman and controls about 68% of the privately held company stock with her children and the senator's son, according to records at the Arizona Department of Liquor License and Control. Cindy and John McCain keep their finances separate, and he has no stake or role in Hensley.

And yet one of his sons by Carol, the wife he dumped for Cinderella, has some company stock, and

Its executives, including John McCain's son Andrew, have written at least 10 letters in recent years to the Treasury Department, have contributed tens of thousands of dollars to a beer industry political action committee, and hold a seat on the board of the politically powerful National Beer Wholesalers Assn.

Between Andrew (Couldn't he go into the Navy too? Did he decide to take the easy way out & go into stepmom's business?) & campaign flights on the Hensley & Co. corporate plane, we're not certain that "has no stake...in Hensley" is fully accurate.

The company has opposed such groups as Mothers Against Drunk Driving in fighting proposed federal rules requiring alcohol content information on every package of beer, wine and liquor.

Hensley has run afoul of health advocacy groups that have tried to rein in appeals to young drinkers. For example, the company distributes caffeinated alcoholic drinks that public health groups say put young and underage consumers at risk by disguising the effects of intoxication.

Public interest groups have petitioned the Treasury Department in recent years to require that every container of beer, wine or liquor carry a label disclosing the amount of alcohol in one standard serving.

The Center for Science in the Public Interest, the Marin Institute, the Consumer Federation of America and Mothers Against Drunk Driving, among others, assert that such information would help Americans drink responsibly and avoid drunk driving. The label would also contain nutrition information such as calories.

But the beer industry has argued that such labels would confuse consumers. With backing from Hensley and others, it has persuaded the Treasury Department to withdraw the alcohol content disclosure from any future label requirement.

Certainly wouldn't want to "confuse" the consumers w/ information, would we? On the other hand, the sweeter the something, & so on.

Aside from the labeling issue, Hensley has begun distributing controversial products known as flavored malt beverages, which critics call "alcopops" because of their similarity to soda pop.

The beer industry, including Hensley, tried unsuccessfully to block liquor makers from getting into the market for the drinks.

Critics say the product is directed mainly at youth and can leave them wide awake without knowing they are intoxicated. Other flavored malt beverages contain sweet fruit flavors that block the taste of alcohol."

These products are starter beverages, intended to introduce consumers to alcohol and alcohol brands," said George Hacker, director of the Alcohol Policies Project at the Center for Science in the Public Interest.

Drink up, kids. Nothing that sweet could hurt you.

Below: Millions in beer bucks & a smile aren't Cinderella's only assets. 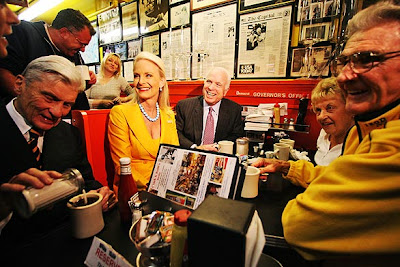 If her husband is elected president and she retains her role at Hensley, she will set a precedent for outside corporate activity by a first lady.

The McCain campaign issued a statement Friday about the issue, saying that "any decisions going forward will be made when John McCain wins the election and takes office, and not before." Hensley executives declined to comment.

Political analysts said they were astounded that the presumptive Republican nominee had not already addressed the issue.

Charles A. Hurley, chief executive of Mothers Against Drunk Driving, said his organization would be watching carefully if a future McCain administration exercised influence on any alcohol issues."

I believe she would have to put that stuff in a blind trust of some kind," Hurley said, "where she would not be involved."

Other experts, however, question whether a blind trust would go far enough to insulate a McCain administration, since the ownership would still benefit the family.

"Blind" trust? Not very "blind" if the McC.s know what's in it. This whole thing is as horrid as Dianne Feinstein's husband, the zillionaire "real estate developer." Gender equality, in a way. Political spouses of both genders & both sides of the aisle are now running things & influencing the politician in the family. What the hell does spineless Speaker Pelosi's other half make money at, by the way?

"With backing from Hensley and others, it has persuaded the Treasury Department to withdraw the alcohol content disclosure from any future label requirement."

Absolutely not true. Coors and the Supreme Court addressed this around 1995. It is a states rights issue, not a federal one, that determines the placement of alcohol content on beer. If you can't find the alcohol by volume (abv) content on your can of beer, get ahold of your state representatives, not Cindy McCain.

The labeling of nutritional values for adult beverages are currently being considered by the Alcohol Tobacco Tax and Trade Bureau (TTB). At the moment, the TTB is wading through thousands of comments from consumers, consumer and special interest groups and importers from a comment session that ended late last year. Until a final determination by the TTB is made as to what and how the information should be presented on booze, wine and beer labels, the drink industry has decided to refrain from voluntarly putting this info on their product labels. No need to jump the gun and then have the feds finally come to a conclusion that would mean destroying their current stock of labels and then printing new ones.

The TTB spells out the current situation in Notice No. 73 and 74 at http://www.ttb.gov/regulations_laws/all_rulemaking.shtml

The drink industry, for the most part, is looking to the feds for guidance since the EU's proposed labeling standards could theoretically stopp the exportation of American booze products to EU countries because of label information that might not confrom to their standards.

Your information is wrong.

The Editor Denies All Responsibility:

Please direct your ire to the Los Angeles Times, which we were quoting. We make no guarantee of the accuracy of anything borrowed, stolen, excerpted, quoted or otherwise used here, we're just looking for something to, as the kids say, "riff on." If a semi-major national newspaper wants to lie through its teeth, rather than rersearch a pile of the wonky rules & regs that glibertarian states righters like you are interested in, that's their & your problem, not mine.

Do you work for Hensley & Co., or the alcohol industry in general, perchance?