Off We Go, Into the Wild Blu–Ooops!! It's The Back Burner for The USAF

by M. Bouffant     at 14:42
DefSec Gates' selection of a non-fighter jock or bomber-boy as the new Chief of Staff of the Air Force pretty much tells us the cowardly Mighty Murderers of the USAF ("Death From Above!") are going to be getting even more cowardly, as they fly their remote-controlled recon missions (and, soon enough, combat missions – if you call dropping bombs on civilian populations from as far away as you can get "combat") from Stateside bases staffed by weasels raised on video games, & devote most of their other resources to flying real fighters to dirty third world shitholes where they'll be fighting dirty foreigners for – surprise!! – not even oil, but food. Then they'll fly the food back here. Guess how much that'll jack up food prices.


Also, take a look at this geek: 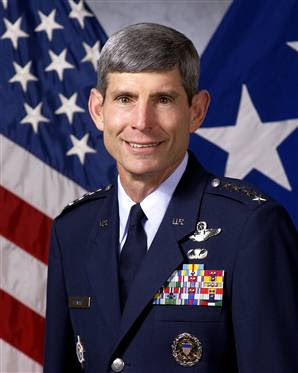 The Chief of Staff designate. No adult w/ a hair-do like that is completely normal. This is very worrisome. Is a 'do like that indicative he'd be willing to nuke Iran?