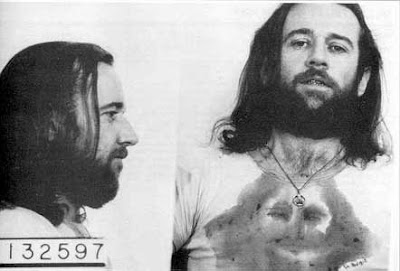 There is little or nothing we can add to what is already out there & what will follow soon in tribute to Mr. Carlin. The man was a giant; he took what Lenny Bruce started & ran w/ it all the way to the bank, & more power to him. fUSION Anomaly, whence we found the above mugshot, seems to have a good selection of Carlin quotes & audio files.

We will add (It's totally about us, remember?) that we were glad to hear Mr. C. express more than once his disappointment when early casualty estimates (bombings, spree killings, atrocities or plain natural disasters) didn't pan out once all the bloated corpses were counted. We've had that feeling many times. Few have the nihilistic intestinal fortitude to admit it, though. (Remember when the Twin Towers death toll of 11 September 2001 was along the lines of "as many as 50,000 people?" Boy, were we saddened at the less than three thousand total.)

Labels: Free Speech Isn't Free, Hating on Fucking Everybody and Everything, Morbidity Report, Telebision, Vile Smut, White People: A Cancer on the World