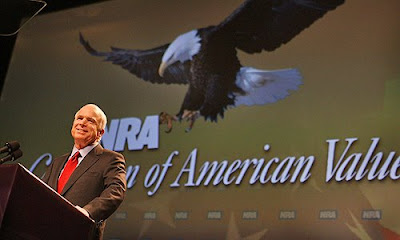 An L. A. Times article on the NRA's declining clout (mostly because Democrats are so cowardly they barely raise the issue of gun control any longer, even as more states allow more morons to carry guns anywhere, at any time) refers to Senator Barack Obama's April "comments about 'bitter' voters who 'cling to guns or religion.'" If anything, they cling to guns as a religion; there's certainly a lot of faith that packing solves all problems.

And Wayne LaPierre (Wayne, favorite name of serial killers, from John Wayne Gacy on, & LaPierre, what is he, a cheese-eating surrender monkey trying to prove his manhood by playing w/ guns?) confirms the "clinging" thesis:

"Voters have proven election after election that this issue is one of their first freedoms," NRA Executive Vice President and Chief Executive Wayne LaPierre said in a recent interview. "When people feel uncertain, when people feel unsafe, they run right back to the 2nd Amendment."

Run right back to it, like you run to Jeezis. "What a friend we have in Jesusdevices designed for murder."

Reaction from readers about the Times' earlier story on exercising your rights by walking around like Roy Fucking Rogers (Are these retards going to take up riding horses everywhere too? Uh, maybe not such a bad idea for the poor white trash losers who have to carry guns to feel manly, as most of them won't be able to afford gas much longer.) is amusing as well.

The Times portrayed a woefully underrepresented group of law-abiding people who choose to arm themselves for protection and to keep the tradition of personal arms alive in this country.

As pointed out in the article, these people are no more likely to harm anyone with their guns on than without, and they are exercising their rights -- something more of us should do.

Well, certainly tradition is the most important thing. And these "law-abiding people" are "law-abiding" right up to the point where they wig out & turn their hoglegs on someone.

In the article, Utah's Travis Deveraux says, "What we're trying to say is, 'Hey, we're normal people who carry guns.' " Is it normal in Utah to fear for one's safety so much that one needs to be perpetually and publicly armed? I thought we had progressed from the times of Wyatt Earp.

Wise up, Arnie. These people haven't progressed since Brigham Young led them to Utah.

Your article about people openly carrying pistols was full of color and sympathy for the nuisances suffered by today's gunslingers, but it ignored the extreme dangers created by the practice.

What happens when an "open carrier" is tired, having a bad day, collides with someone on the sidewalk, and finds himself only two easy steps away from firing his weapon? What about when a criminal sneaks up behind with his own knife or pistol and steals that openly carried pistol? And how about when an open carrier blows cigarette smoke in your face or mine? Who'd dare to complain?

Whether open or concealed, carrying a firearm puts a person within easy reach of tragedy and provides no security one cannot obtain from nonlethal weapons such as mace or Tasers.

The voices of reason. We'll bet Mr. Ceaser in Bogota has a good idea of what guns everywhere can do to a society.

I stand corrected. I said that 36 states have "right to carry" laws. That number, according to the LA Times, has increased to 40. I haven't been keeping up with my gun rights info, living as I do in an anti-gun state......
P.

It just keeps getting more dangerous out there. The Editor may have to visit an unlicensed dealer at a gun show soon, just to defend hisse'f agin' all the gun nuts.