by M. Bouffant     at 11:51
Below: Teeth look authentic, at least. Well, the lower set for sure. But what would you expect from one of the Undead? Photo: Chris Gardner/Getty Images 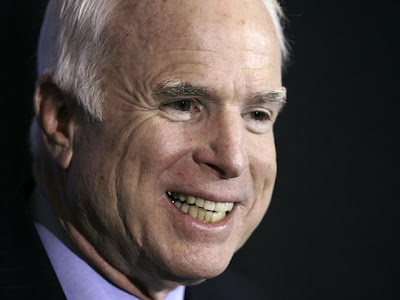 Looks as if the Republicans aren't taking any chances this election cycle. Their previous attempts at subverting democracy (& Democrats); voter suppression, the stolen election of 2000, a boost in the polls for George W(orst) Bush following the attacks of 11 September, 2001, messages from Bin Laden before the stolen election of 2004, and so on, may not work so well this time. They're keeping their cards close to the vest, except when loudmouth super-lobbyist/McCain chief strategist Charlie Black, talked to FORTUNE magazine for an article entitled "The Evolution of John McCain." ("Evolution" here is code for "how Big John is a-flippin' & a-floppin' like a catfish on a hook.")

We wanted to know what single economic threat he perceives above all others.

McCain at first says nothing. He sits in the corner of a sofa, one black, tasseled loafer propped against a coffee table. We're in the presidential suite on the 41st floor of the New York Hilton. McCain has come here - between a major speech on the economy in Washington, D.C., this morning and a fundraiser tonight at the 21 Club - to talk to us and to let us take his picture. He is wearing a dark suit, as he almost always does, with a blue shirt and a wine-colored tie. He's looking not at us but into the void. His eyes are narrowed. Nine seconds of silence, ten seconds, 11. Finally he says, "Well, I would think that the absolute gravest threat is the struggle that we're in against radical Islamic extremism, which can affect, if they prevail, our very existence. Another successful attack on the United States of America could have devastating consequences."

Not America's dependence on foreign oil? Not climate change? Not the crushing cost of health care? Eventually McCain gets around to mentioning all three of those. But he starts by deftly turning the economy into a national security issue - and why not? On national security McCain wins. We saw how that might play out early in the campaign, when one good scare, one timely reminder of the chaos lurking in the world, probably saved McCain in New Hampshire, a state he had to win to save his candidacy - this according to McCain's chief strategist, Charlie Black. The assassination of Benazir Bhutto in December was an "unfortunate event," says Black. "But his knowledge and ability to talk about it reemphasized that this is the guy who's ready to be Commander-in-Chief. And it helped us." As would, Black concedes with startling candor after we raise the issue, another terrorist attack on U.S. soil. "Certainly it would be a big advantage to him," says Black.

Though we're still wondering where Bin Laden is, this new information from the McCain campaign indicates that wherever he is, he's sitting around his cave or tent staring at the satellite 'phone, anxiously awaiting a call from his handler(s) at the CIA, Republican Party HQ, the Office of Special Projects at the Pentagon, or someone in the so-called shadow gov't. of the national security establishment. Keep watching the skies! Or the sewers! Or maybe the oceans!! Or Canada!!

Damn. His hair is whiter than his teeth.

So do you believe in Stubby's shadow government? Like how FEMA is a pretext for martial law?
P.

The Editor doesn't think there's much of a need for a pretext for martial law, & judging from FEMA's recent performances, unless all their resources have been devoted to building invisible concentration camps, I don't think they're that much of a threat.

Rogue or semi-rogue intelligence/security agents &/or parts of agencies, absolutely...Probably not as organized as Stubby thinks, but we're sure there are things that go on that never come anywhere near public or even investigative reporter knowledge, which the senior members of the Congressional Intelligence Committees may know about, if the "programs" cost so much money that Congrefs has to fund them.

Shadow Nat'l. Secutity apparatus is more accurate, but "shadow gov't." is a common enough expression that other paranoids will understand.

And Editor Boy's white hairs are whiter than his smoker's teeth, though not all our hairs are white yet. Stop picking on old people, you'll be one eventually!