by M. Bouffant     at 11:23
From our favorite/only source of info, the L. A. Times, we are inundated w/ stories about one Cinderella Stepford Hensley McCain, wife of John Sidney McCain III, the presumptive Republican Party presidential candidate. One story says that Cinderella is "going crazy." Withdrawal from painkillers again? No, just jewelry mad. 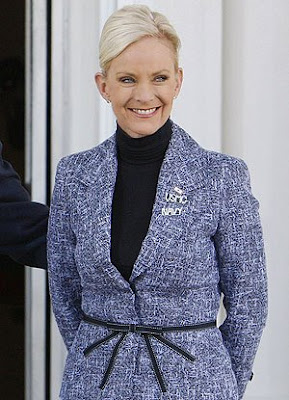 [A] best seller is the "Liberty Eagle," which Hillary Rodham Clinton famously wore on her lapel in 1998, when she defended her husband's indiscretions on the "Today" show. The $150 gold-plated pin depicts an ornery-looking eagle perched protectively on a pearl. Betty Ford, Barbara Bush and Tipper Gore have all worn the bird, which has come to be known as the "Hillary pin."

In 2000, Cindy McCain sported the "Liberty Eagle" when her husband won the New Hampshire Republican primary and pundits wondered why she chose an accessory associated with a feisty female Democrat. The eagle pin hasn't been spotted since.

Below: The "Liberty Eagle." Defending a pearl?

Enough fluff. Time's inexorable course continues, & we'll have to tell you all about Cinderella & her beer distribution conflicts of interest later, when we can get to our next stop in the never-ending search for web access.

Labels: Consumption, Republicans, The Dialectic, WH08, White People: A Cancer on the World