by M. Bouffant     at 13:38
Below: This fool, a 24-year-old graduate student in ancient languages at the University of Colorado at Boulder, "packs" when he goes to his local Starbucks, easily one of the most violence charged spots in Boulder, what w/ all those other grad students jacked up on caffeine & soy lattes. Photo: Ellen Jaskol/L. A. Times 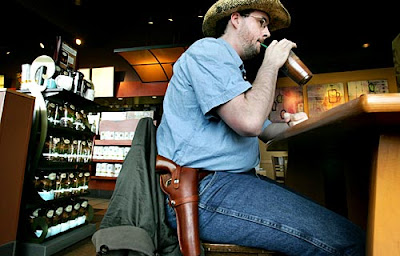 This'll crack you up. After it sends you cowering under your bed in abject yet "irrational" fear.

From Column One of the cat pan-liner, fished out for your edification.

Those who wear their guns in full sight are part of a fledgling movement to make a firearm a common accessory.

What we're trying to say is, 'Hey, we're normal people who carry guns,' " said Travis Deveraux, 36, of West Valley, a Salt Lake City suburb. Deveraux works for a credit card company and sometimes walks around town wearing a cowboy hat and packing a pistol in plain sight. "We want the public to understand it's not just cops who can carry guns."

As Clachelle pushed the shopping cart holding their two young children during a recent trip to Costco, her husband admired the new holster wrapped around her waist. "I like the look of that low-rise gun belt," he said.

The Jensens' pistols were snapped into holsters attached to black belts that hug their waists. Guns are a fact of life in their household. Their 5-year-old daughter, Sierra, has a child-sized .22 rifle she handles only in her parents' presence.

Clachelle is the daughter of a Central California police chief and began shooting when she was about Sierra's age. She would take her parents' gun when she went out and hide it in her purse because the firearm made her feel safer.

"I love 'em," Clachelle said. "I wouldn't ever be without them."

Jensen kept as many as 10 guns in the couple's 1930s-style bungalow in Santaquin, 21 miles southwest of Provo. In January 2005, he decided to get a permit to carry a concealed weapon, mainly for self-defense.

"I'm not going to hide in the corner of a school and mall and wait for the shooting to stop," he said.

Nope, he's going to get as many many innocent bystanders as his cartridge belt allows.

Travis White, 19, who has ear and chin piercings, congratulated Brandon Trask, 21, on carrying openly for the first time that night. "Just wait until you get confronted by a cop," White said. "It'll make you feel brave."

Oh yes, you'll feel like a real man, for once in your empty life. It'll be almost as kewl as playing a video game, except it will be real, numbnutz! And you're much more likely to be the dead one when the game's over.

Days later, Jensen was still thinking about the reaction and the man's belief that guns are unsafe.

"People can feel that way and it doesn't bother me," he said. "If they have irrational fears, that's fine."

Certainly you can't accuse someone who feels he must carry a gun openly wherever he goes to have "irrational fears." Seems like the most sensible idea in the world. It was good enough for John Wayne in many of his classic films. Some varmint or a rustler may show up at the Applebee's or the T. G. I. Fridays, drunk on lite beer & ready to shoot up the place at any minute.

"I love this," he said. "I want people to be aware that crazy people are not the only ones with guns. Normal people carry them."

We can attempt to define "normal" until the cows come home, but as the vast majority of Americans do not carry guns, open or concealed, we doubt if any of these people are anywhere near normal. You have to imagine that these are the sorts of people to whom "honor" & "respect" are driving forces, and that bumping carts in the aisles at Costco, let alone a fender bender, would escalate to gunplay like the crummiest horse opera.

Seriously, there's little attempt by these pindicks even to explain any necessity for being strapped 24/7, other than to feel brave when confronted by the police, or to fantasize about saving a classroom full of teen-age girls from a crazed school-shooter. At least we were spared the "An armed country is a civil country" chestnut. You know, civility at the point of a gun. Not unlike democracy at the point of a "shock & awe" on the other side of the world. Bogus, that is. Most adults who speak of defending one's house & whatnot w/ firearms advise that you had bloody well better be ready to do it, & be ready to deal w/ the psychological aftermath of killing someone, no matter what your fervid imagination thought the intruder was going to do to you, but no mention of this aspect of the "Guns, Guns Everywhere" movement by any of these open-carriers.

We recently mentioned at Fire Megan McArdle that Americans are a bunch of sad frightened losers; this certainly throws a few more rounds in the fire.

Currently, 36 states issue concealed-carry permits to anyone who isn't a criminal or a nut (unlike California). In most of them, however, it is specifically forbidden to carry the weapon in plain sight. That's why it's called a concealed carry permit.
P.

In the linked story there's some info as to that. In Utah, where some of the quoted "packers" live, you can carry openly, w/ a magazine in the rod, but a round can't be chambered & the weapon can't be cocked. We just wonder who's going to find out. Other than by the obvious way.

Travis White, 19, who has ear and chin piercings, congratulated Brandon Trask, 21, on carrying openly for the first time that night. "Just wait until you get confronted by a cop when you're packing while drunk," White said. "It'll make you feel brave."

Wow, our first "fixed"! Thanks! Now it's just like Sadly, No! around here. (More or less.)

Except for the poop jokes.

Even The Editor is on a higher sriritual plane than poop jokes.