Your Tax Dollars At Play 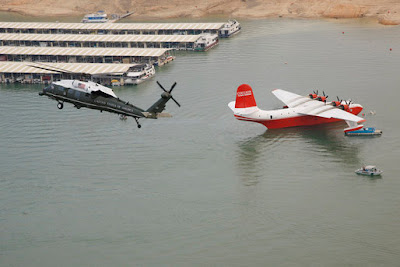 Per the AP, the White House helo fleet will need 28 (?!) choppers to ferry around whichever corporate tool is president, an increase of 9 from the current 19.

The leather tuck'n'roll jobs for these birds must not be done on the cheap in TJ.

At $400 million apiece, the helicopters far exceed a prime example McCain uses on the campaign trail to rail against congressional pork-barrel spending, a $230 million "bridge to nowhere" in Alaska. The British have bought the same base model helicopter for $57 million each.

$343 million per for "amenities?" Yikes!! In true defense procurement style, the price of the new fleet has almost doubled, just in the three yrs. since the contract was awarded.

Originally carrying a hefty price tag at $6.1 billion, the fleet of 28 helicopters being built to fly the next president is now projected to cost $11.2 billion.

As The Editor here is of one-quarter wop-a-dago descent, the following ethnic insult is approved by the Just Another Blog™ Ethnic Insult Committee. The helicopters are not even American-made, but come from an Italian firm, via an "American" defense giant. Does the phrase "Fix It Again, Tony (as in 'FIAT')" come to mind?

In 2005, the Pentagon awarded the contract, itself a subject of controversy. Connecticut-based Sikorsky Aircraft, which had always supplied helicopters for the president, was beaten in the bidding process by Lockheed Martin. The Maryland-based firm proposed a variation of a European helicopter built by Agusta-Westland.

Congress and the Pentagon are already reviewing the program to determine how to cope with the contract growth. In an audit, the Government Accountability Office has also raised concerns about the helicopter's weight and its new rotor system.

This provided another opportunity for Sen. McCain to flip his flop, apparently in mid-sentence.

McCain labeled the contract growth a "scandal" before asking to revise his assessment "in a more polite way." He said the program is part of "an out-of-control procurement system that has to be fixed."

Give you a good idea of the presumed Republican nominee's judgement? Crap on a crutch. Do we need this kind of off-the-cuff foolishness in foreign policy statements?

If anyone gives a flying whatever at a rolling you name it about our most recent encounter w/ Marine One, you may increase your boredom quotient here.