The Curse of K-Lo

by M. Bouffant     at 13:56
No sooner had high-functioning Down Syndrome sufferer Kathryn Jean Lopez (Think we're being "cruel?" Of course we are, but look at the photo below & remind yourself just how cruel the truth can be. And, you have to be a dimbulb to wear one of those flag lapel pins. What's the matter, can't remember where you are, or of which country you're a citizen, K-Lo?) started pimping Alaska 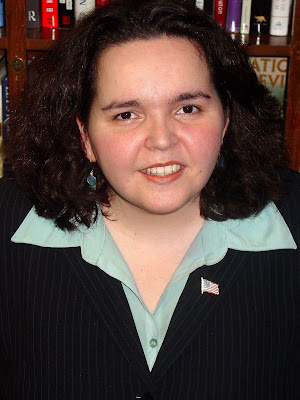 Now, one of the bright new stars in the Republican Party has suddenly become tarnished. The state legislature this week voted to hire an independent investigator to see whether Ms. Palin abused her office by trying to get her former brother-in-law fired from his job as an Alaska state trooper. "This is a governor who was almost impervious to error," says Hollis French, a Democratic state senator. "Now she could face impeachment, in a worst-case scenario."

Gov. Palin appears to have been paying a bit more than standard Republican lip service to "good government," but power corrupts all.

On July 11 of this year, Ms. Palin fired Department of Public Safety Commissioner Walt Monegan. Mr. Monegan then complained that she and her husband had pressured him to fire Mr. Wooten. Ms. Palin, in a statement, denied that, saying she had removed the commissioner she had appointed 18 months earlier because she wanted "a new direction."

Below: A photo of the former pageant queen & her goateed (Just fucking stop w/ those things already!! They were over about two wks. after they started, in the mid-'80s.) husband at her inauguration as governor in December 2006. Photo: Al Grillo/AP 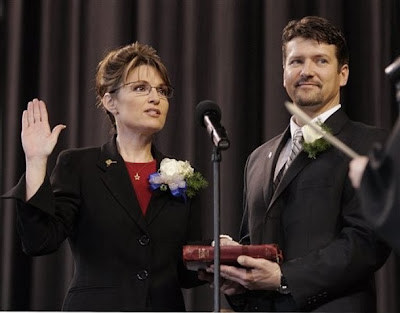 Labels: ConspThry, Denial River, Free Speech Isn't Free, Republicans, Schadenfreude, That About Which We Could Not Possibly Care Any Fucking Less, The Dialectic, WH08

Here's the crux of the Palin "scandal", known as "Troopergate": Gov Palin’s state trooper ex-brother-in-law said he wanted to kill Palin’s dad and they’re investigating Palin for talking to the police about it.

And this is from the ANCHORAGE DAILY NEWS:

“Issue’s not why Monegan was fired, but why trooper wasn’t

(07/29/08 23:20:50)
They called Ronald Reagan the Teflon president. I think we should start calling Sarah Palin the Teflon governor. Based on people’s reaction to the recent dustup over the dismissal of Walt Monegan, I’d say the lady would pretty much have to pile up more indictments than all our current politicians combined before people would start to seriously question her.

This is going to make some people absolutely nuts. Unfortunately, for those seeking to find some dirt that will stick and bring down her still astronomically favorable ratings, this current dustup is probably not the ticket they are seeking. Firing someone who is a political appointment is done all the time. Since losing your job is a common experience for most of us, the termination of a commissioner is just not something that gets people’s dander up.

Of course, the idea that no one should be fired for refusing to cave in to pressure to circumvent state personnel rules is pretty much a no brainer, assuming the allegations are true.

Except in this case, the employee being discussed is a trooper who carries a gun and the force of law based on the authority given to him by, ultimately, us. He also happens to be an employee who somehow managed to Taser his 11-year-old stepson and get away with it.

The limp explanation that he was trying to show the young man how it felt is simply stupid and an insult to any thinking, reasonable adult. Assuming we want the people we authorize to carry guns and use them in our name to be adults, he should have found a much, much better way to get this lesson across.

In fact, his actions went beyond stupid and, for many of us, straight into the realm of criminal. I’ve had parents on my caseload whose kids would have been permanently removed from them if we’d gone to court with that.

So this particular trooper is probably not the poster boy the anti-Palin folks might want to trot out to show her misusing her power as governor. At least, the people I’ve talked to all seem to shake their heads and say that yeah, if she did exert pressure, she shouldn’t have. And then they look up and say, “But man, what about that trooper!” They zip right past her possible actions and land squarely on the trooper. The minute the story reaches the point where he’s Tasering his stepson, people start lining up behind Palin. Because most people don’t want Mike Wooten to be the trooper responding to their call for help if this is any indication of his ability to make sound or reasonable judgments. And that seems to trump any inappropriate actions on her part as the focal part of the story.

It’s becoming glaringly evident that public opinion is on Palin’s side insofar as they wish this man had lost his job as a trooper somewhere between taking a moose illegally, drinking in a trooper vehicle and Tasering his stepson. And they wonder why the state troopers tolerate this behavior in their ranks.

Monegan was right to not cave if the alleged pressure was there from the administration to intervene in a personnel matter that had already been resolved internally, as insulting as that minimal response seems to be. While the legal right and wrong of the matter might ultimately break toward Monegan and against Palin, it will probably only make her a more sympathetic character, as people side with the person who tried to rid the troopers of someone who seems questionable at best as trooper material.

Let’s think about this. He was stopped in his vehicle after a bartender called troopers to say he thought Wooten might be driving drunk. The trooper who stopped him admitted to smelling booze on his breath but made the decision that he didn’t need to take a Breathalyzer because Wooten didn’t seem drunk. Raise your hand if you think that trooper would not have given you a Breathalyzer test under the same circumstances. Yep, as I suspected, not a hand in sight.

Which brings us to the point most people are at. Palin isn’t their problem. A state trooper agency that thinks this man should still be wearing a badge is.”