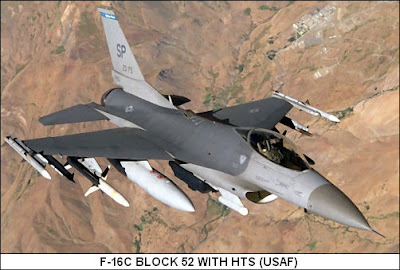 Another boondoggle in the works to funnel more money to (un-)American defense firms who do their best to support the Republican Party, knowing that under right-wing administrations more funds will be given to said companies, insuring a decadent life-style for the executives & some of the stockholders.

State Department officials say the upgrades would greatly enhance the F-16s’ ability to strike insurgents accurately, while reducing the risk to civilians. The officials, who spoke on condition of anonymity because Congress was weighing the plan, said the timing was driven by deadlines of the American contractor, Lockheed Martin.

Yep, it's all because of Lockheed Martin's deadlines. That's what counts here. And like hell the upgrades will enhance accuracy in striking insurgents. None of this crap ever works as advertised, or as presented by the running dog Yankee news media. Not to mention that Americans dealing "death from above" (Sound religious & holy to you? It isn't, it's cowardly.) can't tell the difference between insurgent gatherings & wedding parties. Maybe the Pakistani Air Force will do a better job; we're not holding our breath on that, however.

Pakistan agreed to buy about 70 F-16s in the 1980s, and about 40 were delivered before Congress cut off all aid and military sales in 1990, citing Pakistan’s secret development of nuclear weapons.

A new deal was struck after the Sept. 11 attacks to allow Pakistan to buy newer models, in part to reward Pakistan’s cooperation in fighting terrorism.

And in part to reward American cos. that reward Republicans. Not to mention that the outrage about Pakistan's development of nuclear weapons fell by the wayside soon enough. And the alleged distribution of nuclear technology to North Korea & Iran? A. Q. Khan, remember? (Now released from the horrible punishment of "house arrest" he received.) Whatever, says the current admin. We also have some memory of Richard Armitage telephoning ol' Pervy Musharraf & advising him that we'd nuke his ass into Gen. Curtis LeMay's proverbial Stone Age if he didn't cooperate. So why the fuck do we have to provide dime one to him in addition? So our taxpayer dollars can go from Lockheed Martin et al. to the coffers of the Republican Party. No fucking wonder the Party of Lincoln™ is opposed to public campaign financing. They already have it.