by M. Bouffant     at 17:28
And it's almost always worth stealing something from The Divine Mr. M. Today we found the city of the future, here & now, 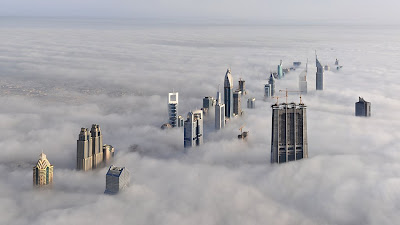 built on the backs of virtual slave laborers (No, we do not mean some digitized avatar, ignorant children of today! We're talking physical labor w/ your hands, etc.) from south Asia, the Philippines, Indonesia & wherever else they can find them. Very Blade Runner. Probably won't be too long before Americans who can use a rivet gun will be there slaving away w/ the rest of them.

It is a nice shot, though, and apparently taken from another bldg., probably the soon-to-be world's tallest, which is doubtless being erected as we type.

You might want to click to Mr. M's site, as he cropped it rather well, & it's bigger; the above version is from the original flickr™ spot.

Labels: Corporations, Doctors of Jihad, Hating on Everybody and Everything, Humanoids: A Cancer on The Planet, Oddities and Artifacts, Police Terror, The Militarized Society, Un-American Activities

It does look un-real, but it appears the future is here. Well, not here, but on the other side of the world. Do check the link for an actually better (Oh, Bugger™!) crop & size, if you haven't.