by M. Bouffant     at 15:14
Read if you will the latest leftist smear against noble Republican war hero John Sidney McCain III. As nearly as we can figure it, agents of communist influence must have doctored Sen. McCain's memoir (Worth the Fighting For) or Florida court documents. Or both.

On Christmas Eve 1969, while she was driving alone in Philadelphia, Carol McCain's car skidded and struck a utility pole. Thrown into the snow, she broke both legs, an arm and her pelvis. She was operated on a dozen times, and in the treatment she lost about 5 inches in height.

After John McCain was released in March 1973 and returned to the U.S., he told friends that Carol was not the woman he had married.

Nice fellow, huh? Who was she then, an alien pod person? One can only wonder if McCain was the man that Carol married.

[Melinda] Fitzwater [a cousin of McCain's] recalled visiting the family on Thanksgivings, and McCain seemed content barbecuing a turkey on his outdoor grill near Jacksonville, Fla.

Excuse us, but what the hell kind of crap is this? Barbecuing a turkey on an outdoor grill? Just this a. m. we heard a sound clip of "Bay" Buchanan (Pat's equally Catho-fascist sister) whining about Sen. Obama not respecting or understanding or something "our cultural traditions" or crap like that. And yet John Sidney McCain III is allowed to grill his turkey on a fucking barbeque? Beyond belief. Where is the stuffing? What would grandma say, if we hadn't shipped her to the old folks' home?

But two years later, while on a trip as a Navy liaison with the Senate, McCain spied Hensley at the Honolulu reception. In a recent television interview with Jay Leno on the "Tonight Show," Cindy McCain joked about how the Navy captain had pursued her. "He kind of chased me around . . . the hors d'oeuvre table," she said. "I was trying to get something to eat and I thought, 'This guy's kind of weird.' I was kind of trying to get away from him."

John McCain was 42; she was 24. During the next nine months, he would fly to Arizona or she would come to the Washington area, where McCain and Carol had a home.

Carol McCain later told friends, including Reynolds and Fitzwater, that she did not know he was seeing anyone else.

Why we'll never understand women: He's got 18 yrs. on her, he's married, he's "kind of weird," & before you know it, they're flying all over the country to be w/ each other. Not to be more sexist than we already are; maybe it's just heiresses (of whom we have even less knowledge than we do of ordinary women – not that any woman is merely "ordinary," of course) that we'll never understand.

Carol McCain was distraught at being blindsided by her husband's intention to end their marriage, said her friends in the Reagan circle.

"They [the Reagans] weren't happy with him," Fitzwater said. Carol McCain "was this little, frail person. . . . She was brokenhearted."

Two points w/ this one. If Carol McCain was so distraught, blindsided, etc., we can only wonder why she never agrees to interviews on the whole miserable subject. This may give a hint:

She [Carol McCain] has two sons from an earlier marriage: Andy, a vice president at Cindy McCain's beer distributorship, and Doug, a commercial airline pilot.

When J. Sidney married Carol, he adopted Hensley V-P Andy. We wondered a bit when first reading that Andy had a job w/ Cinderella's outfit, yet wasn't even Sid's biological offspring, but our cynical mind came to the realization that if Carol wants her son to hold on to his job, she'd best keep her trap shut. (WARNING! CHEAP SHOT FOLLOWS: And we hope that Doug is a better pilot than his adoptive father.) 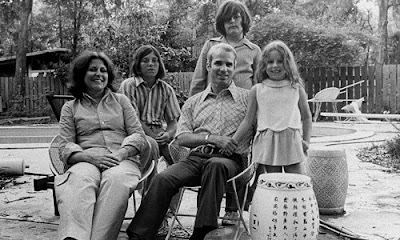 And one more cheap shot: That's Carol McCain on the left, above. We understand she lost five inches after the hideous accident, but where do they get "Carol McCain 'was this little, frail person. . . ?'" Huh? Looks pretty healthy to us.