Further Recession On the Ecomonic Front

by M. Bouffant     at 11:12
Continuing from the item immediately below, we refer to USA Today for a change, so our wonderful readers may look at pictures & graphs instead of hurting their minds w/ cumbersome words. 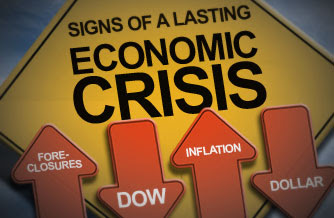 David J. Lynch, USA TODAY
So this is what a day of reckoning feels like.

Already down 23% from its October high, the Dow Jones industrial average touches a two-year low. The Labor Department says wholesale prices are rising at their fastest pace since Ronald Reagan's first year in the White House. Embattled automaker and American icon General Motors suspends its dividend to stockholders. The last time that happened? 1922.

If it wasn't clear before Tuesday, it is now: This is no ordinary economic crisis, and it won't be over anytime soon. In fact, problems are multiplying. A year ago, the financial virus seemed confined to subprime mortgages, loans given to those with less-than-perfect credit. Now, much of the banking system appears rickety, and the U.S. economy has slowed to a crawl. But thanks to robust demand from still-growing countries such as China, the prices of commodities from oil to food have soared — hitting Americans from the gas pump to the grocery checkout.

Worst-case scenario: long, painful death from starvation or from a medical condition that can't be treated w/o money.

The Ninny-in-Chief attempted to, as used to be said, "jawbone" the whole mess. As usual, he appears not to have a clue.

A day after reports of losses by regional banks, causing some depositors to pull their money out, Mr. Bush held an unscheduled news conference at which he felt compelled to remind Americans that their deposits were insured up to $100,000.

“My hope is that people take a deep breath and realize that their deposits are protected by our government,” the president said. He added that economic growth “was not the growth we’d like” but expressed confidence that the country would overcome “a time of uncertainty.” The nation’s troubled financial system is “basically sound,” he added.

But concerns that consumer banking could succumb to the ills of the credit crisis clearly rattled official Washington, as Mr. Bush’s citation of the federal government’s insurance of bank deposits made clear.

“The bottom line is this: We’re going through a tough time,” Mr. Bush said. “But our economy’s continued growing, consumers are spending, businesses are investing, exports continue increasing and American productivity remains strong.”

Mr. Bush, at his news conference, also sought to demonstrate that he understood the hardships of Americans. “It’s been a difficult time for many American families who are coping with declining housing values and high gasoline prices.”

When asked about his statement in February that he had not heard forecasts that gasoline prices could reach $4 a gallon, Mr. Bush interrupted and replied, “Aware of it now.”

Mr. GrammBush ended his unscheduled presser by advising Americans not to whine like spoiled little titty babies, but instead to work harder, so their owners would have more money to invest in overseas jobs & facilities in order to "really get this economy rolling again."

Inflation is the most commonly used economic term in the popular media. Public concern about inflation generally heats up in step with inflation itself. Though economists do not always agree about when inflation starts to interfere with market signals, the public tends to express serious alarm once the inflation rate rises above 5 or 6 percent.