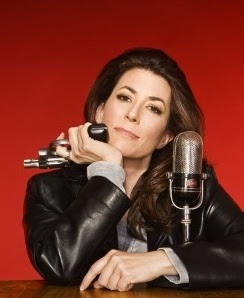 Have we reminded you lately of how pathetic an excuse for a human being Tammy Bruce is? Besides being over 30 (or 40, even, who knows?) & still calling herself "Tammy," of course.

We had the misfortune of tuning in to KABC Talk-Radio 790 too early for the Dodger game yesterday (They lost – again– so we doubt we'll be climbing on their bandwagon any time this yr.) & were treated to Ms. B. using the death of Tony Snow to whine about AIDS being cured or something, & how anyone in this modern age could die of cancer, as Mr. Snow did. Of course, to Ms. B., AIDS is a "behavior caused" disease (no mention of smoking, air pollution, having to work in a polluted workplace or anything of the like causing cancer). You know, we were appeasing the homos by "curing" AIDS, which was all their fault in the first place &, apparently, ignoring cancer. Nor does it occur to her that cancer is not an immuno-suppressive disease, it's many different kinds of disease, & blah blah blah...Yes, she went on about unsafe sex & needles & so on, though not actually calling for the execution of sodomites. Christ on a cracker!!

Her other lovely line, before we had to change the channel in mental self-defense: Barack Obama is a "Marxist; Jimmy Carter with a tan." Stop it you fucking RW morons!! Just fucking stop it!! You want to see Marxists, wait'll Just Another Blog's™ editorial staff is running the country!! Marxist. Hmpf. If Obama's a "Marxist," then McCain's two & a half Nazis. Actually, don't stop it. Keep crying wolf, right wingers. We don't care any more. Your party's over, in all senses of the word.