by M. Bouffant     at 11:09
The Knoxville UU Church shooter, Jim Adkisson, seems to have been getting his paranoid concepts directly from the world of Rabid Weasel talk radio & the books written by the hosts thereof.

...said Adkisson wrote that he was angered by "his lack of being able to obtain a job," a reduction in his food stamp allotment, and "the liberal movement." Owen explained the liberal movement, as defined by Adkisson, included liberal philosophies and issues pertaining to gays.

Rightist logic: "My food stamp allotment is being reduced, I'm gonna go shoot me some lib-ruls."

Knoxville Police Department Investigator Steve Still wrote in the search warrant that Adkisson "admitted to shooting McKendry and several others at the church."

Adkisson went on a rampage at the church, Still wrote, "because of its liberal teachings and his belief that all liberals should be killed because they were ruining the country, and that he felt that the Democrats had tied his country's hands in the war on terror and they had ruined every institution in America with the aid of major media outlets."

Adkisson, who had served in the military, said "that because he could not get to the leaders of the liberal movement he would then target those that had voted them in office," the search warrant states.

It will surprise most lib-ruls that there is a "liberal movement," let alone that it has any "leaders." And if anyone has tied America's hands in the war of terror, it's G. W. Bush, by tying up virtually all American forces not in Afghanistan in the Iraq occupation.

No, really? Since when is Hannity a "political pundit?" He's a telebision/radio hack like O'Reilly & Weiner (Savage).

And click here for a bit of information about what a "law-abiding citizen," you know, the kind who should be able to own guns, for self-defense (maybe killing "liberals" is considered self-defense by certain smaller-penised elements of our society) Mr. Adkisson was.

The Adkissones' marriage disintegrated eight years ago after Adkisson had been drinking heavily and then put a gun to Alexander's head, said Carol Smallwood of Alice, Texas.

According to Anderson County Court records, as their marriage went awry, Jim David Adkisson said he had an option.

That choice was to blow his wife's brains out and then do the same to himself, an order of protection in Anderson County Chancery Court shows.

Yet this guy who

"...always had the attitude the government was trying to get him,'' Smallwood said. "He disliked blacks, gays, anyone who was a different color or just different from him.

"He's a very intelligent man but he couldn't get in the mainstream and hold a job,'' Smallwood said.

was able to purchase

...the shotgun "about a month ago" at a pawn shop. Owen declined to identify the pawn shop, but police said the business is located in Anderson County.

How many more of these incidents will it take before the lib-ruls stop tying our hands w/ their gun regulations, constitutional rights other than the Second Amendment? When will we be free to continue the war of terror w/ our hands free, & our spirit proud? Here are a couple of licenses to get you started. 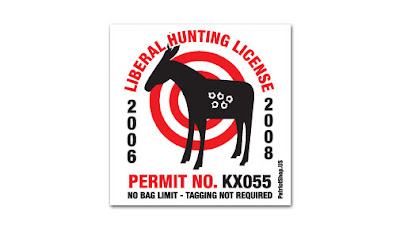