"My Friends, I Am Simply Too Short to Serve" 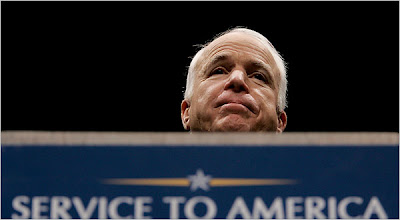 John Sidney McCain III (remember, he's not an elitist) has a reading problem. (We've just suffered through almost eight yrs. w/ a dyslexic at the national helm, do we need the four more yrs., maximum, that Johnny Mac would serve if elected?)

We steal our story today from the Liberal Bible™ (as Bill O'Reilly refers to it) the N. Y. Times.

By his own admission, Mr. McCain is not a great orator. He is ill-suited to lecterns, which often dwarf his small stature, and he tends to sound as if he is reading his lines, not speaking them. His shortcomings have been accentuated in a two-man race, particularly because the other man — Senator Barack Obama, the presumptive Democratic nominee — can often dazzle on stage.

Oh yes, not only does he have trouble reading, he's a fucking shrimp. (Have any of the "old media" given us his exact height yet?) Do we need some twisted Napoleonic geek trying to prove something to his father & grandfather, both of whom made four-star admiral, while he barely got out of Annapolis, & only made captain, even after his hideous prisoner of war experience?

It's entirely "Bush III" in the campaign as well. (Except for the Fox News people, of course.)

[McCain] brought in a new adviser — Greg Jenkins, a former White House official and Fox News producer — who will oversee the producing and staging of Mr. McCain’s events. Mr. Jenkins is considered an expert at political stagecraft, oversaw many of President Bush’s appearances and served as executive director of the 2004 inaugural committee.

Mr. McCain is working closely with aides like Brett O’Donnell, a former debate consultant for Mr. Bush, to improve his speech and performance. He is working to limit his verbal tangents and nonverbal tics. He is speaking less out of the sides of his mouth, which can produce a wiseguy twang reminiscent of the Penguin from the Batman stories, and he is relying less on his favorite semantic crutch — the phrase “my friends” — which he used repeatedly in his campaign appearances.

We'll miss that semantic crutch. We at Just Another Blog™ always equate "my friend" w/ someone of a Middle Eastern culture who is about to screw us on a rug deal, but that's just us. Speaks out of both sides of his mouth, does he?

Oh, crap. Are we (who dropped out of said university) going to have to stop saying that as well? The man is an absolute bastard.