Let's Have a Class War, So The Rich Can Go Die

Gramm [...] told the [Washington] Times: "You've heard of mental depression; this is a mental recession." He noted that growth has held up at about 1 percent despite all the publicity over losing jobs to India, China, illegal immigration, housing and credit problems and record oil prices. "We may have a recession; we haven't had one yet."

"We have sort of become a nation of whiners," Gramm said. "You just hear this constant whining, complaining about a loss of competitiveness, America in decline" despite a major export boom that is the primary reason that growth continues in the economy, he said.

We are now anxiously awaiting some right wing ratbag to start whining about "class warfare." Or about what an "elitist" Barack Obama is.

Former Sen. Gramm, who left the Senate to become a vice chairman (not vice-president, mind you, vice chairman!!) of UBS (Union Bank of Switzerland) &, per the AP, has a doctorate in economics (We'd really like to know where he got that doctorate. Mail order divinity school, perhaps?) is one of Republican presidential hopeful (It's all about hope by now, 'cause they got nothing else. Seriously, this is starting to look like Fred Thompson's non-campaign, right down to the bottle-blond wife.) John Sidney McCain III's primary economic advisers. McCain moved quickly to cover his ass, saying, "Phil Gramm does not speak for me. I speak for me." Does that mean that no matter what we hear from any of McCain's advisers, consiglieri, surrogates, endorsers, & the like it's just bullshit & we shouldn't pay any attention to anything they say? Why, yes it do. Whatta ya know?

P. S.: Phil Gramm's best known statement prior to this: "I have more guns than I need, but not as many as I want." Just Another Blog™ would like to jam Gramm's chin into a vulnerable part of his nervous system, but, sadly for us, fortunately for him, Phil is a chinless dweeb. 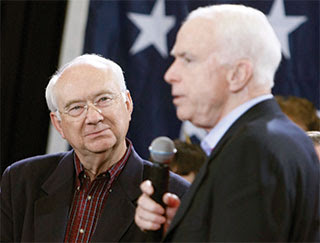 P. P. S.: In our endless research (Google™ response time: 30 secs.) we found an interesting "assessment" of Chinless Phil from 7 September 2001. Yes, before "Everything changed." He was a piece of shit seven yrs. ago as well.