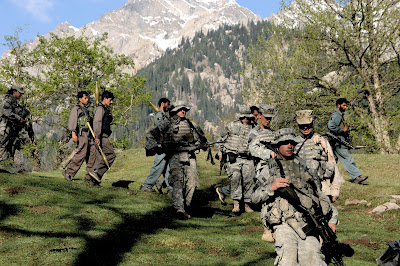 Afghanistan (not the "central front in the war on terror," though perhaps it should be) is quite another story. Although some Iraqi/Palestinian style tactics have been adopted by Talibanis (suicide bombings not really part of the action there before the subjugation of Iraq, even during the Soviet occupation) there is definitely a battlefield there. Afghanistan is one of the few nations in all of Afrika & Asia that's never been successfully colonized by Euro-imperialists, & they didn't keep the Anglos & Slavs out by guerrilla tactics alone. They fought the old fashioned way, standing up & shooting. Granted, the terrain is ultra rugged, the locals know it like the backs of their hands, supplying invaders is difficult, & there've been plenty of ambushes & trickery.

Today, even w/ logistics not as difficult as in previous centuries thanks to the Wright Bros. & Sikorsky, things still aren't going as well as hoped. Here's the follow-up to the "Nine Americans Killed in Attack on Afghan Base" story you may have heard Monday.

U.S. troops abandoned a remote outpost in eastern Afghanistan where militants killed nine of their comrades this week, officials said Wednesday, in another sign of the struggle facing foreign and Afghan security forces strung out along the mountainous border.

The violence is another indication of the growing strength of the Taliban-led insurgency, especially in Afghanistan's east, where the outpost near the village of Wanat was breached by militants on Sunday. Nine Americans were killed in the deadliest incident for U.S. forces in three years.

On Tuesday, the insurgents drove out the handful of police left behind to defend government offices in the village, but 50 more officers were deployed Wednesday and soon regained control, senior provincial police official Ghoolam Farouq said.

Yep, the surge worked (Not! And it took Brainiac Bush about five yrs. to figure out how many troops should have been there originally.) but despite Hitch's statement

I dare say the word of that [his imaginary "battlefield defeat"] would have spread to Afghanistan fast enough and, indeed, to other places where the enemy operates. Bear this in mind next time you hear any easy talk about "the hunt for the real enemy" or any loose babble that suggests that we can only confront our foes in one place at a time

the "insolent" (his word) Afghans have continued to attack, & apparently w/ some effect.

The retreat from the eastern outpost will be considered a victory by the insurgents, and comes after a spate of security setbacks for President Hamid Karzai's government, including a spectacular Taliban jail break in the southern Kandahar province in June that freed about 900 inmates, and a spike in attacks alongside the border with Pakistan.

In response, Karzai has stepped up his rhetoric against neighboring Pakistan, whose lawless tribal areas adjacent to Afghanistan serve as sanctuaries for al-Qaida and other militants.

Karzai blames the attacks — including suicide bombings and cross-border raids — on Pakistan's intelligence service, alleging they are behind the insurgency in Afghanistan. Pakistan denies the charge saying Karzai is trying to create "an artificial crisis" to deflect attention from his own failings.

The accusations have pitched relations between these key U.S. allies to their lowest point since [the] U.S. invasion of Afghanistan in 2001.

The security experts here at Just Another Blog™ are not worried that United Snakes forces will actually do anything about Pakistani aid & comfort to the "insurgent forces," as they point out that Pakistan has nuclear weapons, & therefore the paper tiger Americans will not dare make any serious moves, but will continue artillery strikes & aerial bombardment from safety, like the cowards they are.

If any one was worried that U. S. forces would be taking on Pakistan as well as Iran before Election or Inauguration Day, relax. However, our security staff does fear that in exchange for Bush taking more mangos off their hands, the Indian gov't. may be persuaded to jump ugly w/ the Pakistani intelligence services.

The White House has now revealed the full extent of the historic agreement reached with India.

In return for American help with its civilian nuclear programme, India will export mangos to the US.

So that is uranium and plutonium for India and exotic fruits for America.

Of course, I am mischievously conflating two separate agreements, but it is not hard to see how the Indians feel they have got the better part of the bargain.

Please excuse the mischievous conflation. We're working on reducing it. Step One: Admit you have a problem.