These People Live Among You, Or "We Surround Them," Or Something 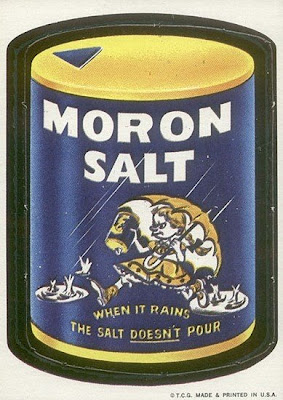 Some ridiculous portion of Americans polled state that they believe in "angels," so these reactions to an aerial phenomenon (which appears to be fully explained) aren't surprising, just frightening.

FREDERICKSBURG, Va., June 16 (UPI) -- A Virginia family believes the black ring they saw in the sky during a trip to an amusement park was a sign from God.

Officials at Kings Dominion, a theme park near Fredericksburg, say the ring Denna Smith and her family spotted Monday was smoke from the Volcano ride, WAVY-TV, Portsmouth, reported.

Smith told the television station the ring was perfectly round and so tight it was "like a cut in the middle of the sky," that it did not look like smoke. She said the family prayed together as soon as they got home.

Cameron Pack, a UFO investigator, said he does not accept the Kings Dominion version because a similar ring appeared in the sky at Fort Belvoir, Va., more than 50 years ago.

Smith said she is unsure what the sign means.

"I still believe it is still out there," she said. "We just don't know where it went."

We say that about virtually everything. And it's true.

Labels: Free Speech Isn't Free, Gawd, Hatin' on America, Hating on Fucking Everybody and Everything, Humanoids: A Cancer on The Planet, Religiosity, The Dialectic