by M. Bouffant     at 14:45
On to important, meaningful political news, that will eventually determine the kind of shithole nation we'll be living in, as opposed to celebrity fetishization all day & all night & all afternoon, as HuffPo tales a momentary, palate-cleansing break to focus on a non-Jacko event: Sarah's Outrage! Linda Beigel is the malicious desecrator. Eddie Burke is the face that Ms. B. 'Shopped onto Prop Palin's body. Shannyn Moore compares & contrasts the two.

Linda has blogged for years. She walks with a cane, and has physical disabilities. She has a bi-racial child and is always on the righteous side of fighting discrimination. She attended the Anchorage assembly meetings this week to testify in favor of the ordinance banning discrimination against the GLBT community. Burke attended the same event, protesting the civil rights ordinance with a shirt stating: "Homophobic, Red Shirt [Does he mean "Red State?"], Bible Thumping Nazi, Gay Bashing, Tea Bagging, Rascist (yes misspelled), White Guy, Bigot." Yes, Sarah Palin pals around with this fine example of tolerance.

On whose side would you be? (Please decide soon. There will be no fence-sitters in the future. Partly because there will be no fences, but you know what we mean.)
VISUAL AIDS (Teachers, see p. 164 of the Lesson Plan/Key.):
Original Image (Scouted by "g.") 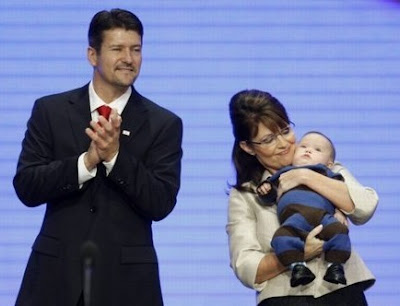 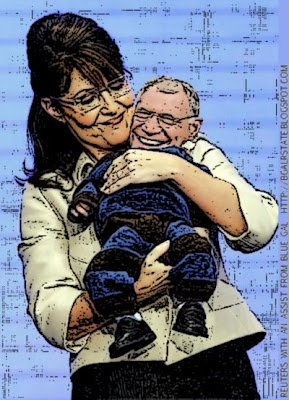 "Well gee, if the amnio had warned me he'd be like this, I'da rethunk my 'culture of life' mumbo jumbo, you betcha!" Caption this photo[shop] in comments yourself ...

That could be taken as offensive. (We didn't dare look in the comments.)
The reaction to the above "OUTRAGE!!" from the Palin camp? Not a peep. Cynics might think that's because Linda Beigel actively keeps tabs on Governor P.'s policies & actions at the state level, where Sarah can be effectively countered/exposed, while CROOKSANDLIARS doesn't dig as much dirt, but mostly (here, certainly) slings some mud around. (Not that we don't sling the mud. We're just typing that neither we nor C&L are so heavy on the minute investigative stuff.)
And to remind us all, the shot bemoaned around the world: 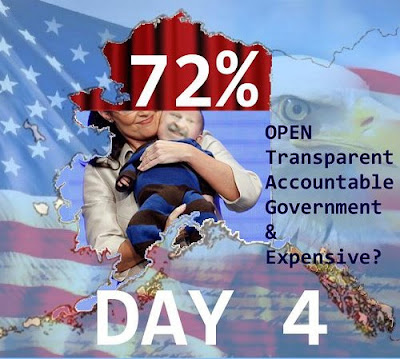 Really, isn't this more fun than dissecting a corpse & its estate?

And Secretary of State would be Not Joe the Not Plumber, of course.
~