by M. Bouffant     at 00:01
By The Associated Press 1 hr 15 mins ago Today is Thursday, June 11, the 162nd day of 2009. There are 203 days left in the year. The AP. A/V. UPI Almanac. Today's Highlights in History: On June 11, 1776, the Continental Congress formed a committee to draft a Declaration of Independence calling for freedom from Britain. On this date: Five hundred years ago, in 1509, England's King Henry VIII married his first wife, Catherine of Aragon. [What do you get a couple for their 500th anniv. gift? — Ed.] In 1770, Capt. James Cook, commander of the British ship Endeavour, discovered the Great Barrier Reef off Australia by running onto it. [There will always be an England. — Ed.] In 1919, Sir Barton won the Belmont Stakes, becoming horse racing's first Triple Crown winner. In 1942, the United States and the Soviet Union signed a lend lease agreement to aid the Soviet war effort in World War II. In 1947, the government announced the end of household and institutional sugar rationing, to take effect the next day. Fifty years ago, in 1959, the Saunders-Roe Nautical 1, the first operational hovercraft, was publicly demonstrated off the southern coast of England. Today in 1963, snapshots of America & our world in the fabled '60s: Gov. George Wallace confronted federal troops at the University of Alabama in an effort to defy a federal court order to allow two black students to enroll at the school. 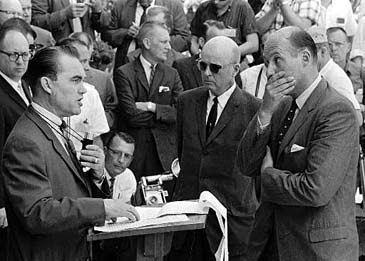 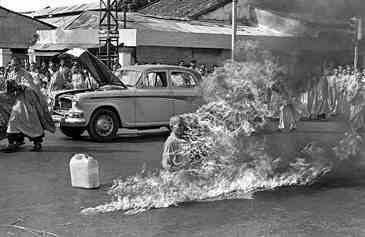 In 1977, Seattle Slew won the Belmont Stakes, capturing the Triple Crown. In 1985, Karen Ann Quinlan, the comatose patient whose case prompted a historic right-to-die court decision, died in Morris Plains, N.J., at age 31. Ten years ago: The FBI was seeking the creator of ExploreZip, a file-destroying computer virus which had hit some of the nation's biggest corporations. In 2001, Timothy McVeigh was executed by injection at the federal prison in Terre Haute, Ind., for the 1995 Oklahoma City bombing that killed 168 people. In 2003, pioneering broadcast journalist David Brinkley died at age 82. Five years ago: The nation bade a lingering goodbye to former President Ronald Reagan at a stately funeral service in Washington followed hours later by a hilltop burial ceremony in his beloved California. Oklahoma City bombing conspirator Terry Nichols was again spared the death penalty when jurors who'd convicted him of 161 murder counts deadlocked over his sentence. "Prince of high fashion" Egon von Furstenberg died in Rome at age 57. One year ago: President George W. Bush, during a visit to Germany, raised the possibility of a military strike to thwart Tehran's presumed nuclear weapons ambitions; Chancellor Angela Merkel joined Bush in urging further sanctions against Iran if it failed to suspend its nuclear enrichment program. For his part, Iranian leader Mahmoud Ahmadinejad called Bush a "wicked man." Four Boy Scouts were killed when a tornado hit the Little Sioux Scout Ranch near Blencoe, Iowa. Today's Birthdays: Opera singer Rise Stevens is 96. Actor-producer Richard Todd is 90. Actor Gene Wilder is 76. Actor Chad Everett is 72. Comedian Johnny Brown is 72. Former auto racer Jackie Stewart is 70. Singer Joey Dee is 69. Actress Adrienne Barbeau is 64. Rock musician Frank Beard (ZZ Top) is 60. Animal rights activist and PETA founder Ingrid Newkirk is 60. Rock singer Donnie Van Zant is 57. Actor Peter Bergman is 56. [Not the Firesign Theatre feller. Some soap actor. The real one would get a photo. — Ed.] Football Hall of Famer Joe Montana is 53. Actor Hugh Laurie ("House, M.D.") is 50. Singer Gioia Bruno (Expose) is 46. Country singer-songwriter Bruce Robison is 43. Actor Peter Dinklage is 40. Country musician Smilin' Jay McDowell is 40. Rock musician Dan Lavery (Tonic) is 40. Christian rock musician Ryan Shrout is 29. Actor Shia LaBeouf is 23. Today In Entertainment History -- On June eleventh, 1958, Jerry Lee Lewis performed one of two scheduled shows at a New York club. He went home before the second show because the press had been openly hostile toward him, and the show had poor ticket sales. In 1965, the Rolling Stones released "Got Live If You Want It." Screams from the audience nearly drowned out the music. In 1966, Janis Joplin performed with Big Brother and the Holding Company for the first time in San Francisco. European radio stations falsely reported that Roger Daltrey of The Who was dead. The truth was that Pete Townshend had minor injuries from a car accident a few days earlier and the stations reported bad information. Forty years ago, in 1969, David Bowie released "Space Oddity" as a single, to coincide with the first lunar landing. In 1976, Santana's ninth album, "Amigos," went gold. It included their minor hit "Let It Shine." Also in 1976, Wild Cherry released "Play That Funky Music." In 1978, the Rolling Stones released the album "Some Girls," which caused controversy because of raunchy lyrics in the title song. Thirty years ago, in 1979, actor John Wayne died of cancer in Los Angeles at the age of 72. In 1993, "What's Love Got to Do With It," the movie based on Tina Turner's autobiography, was released nationwide. Ten years ago, in 1999, actor DeForest Kelley, who played Dr. McCoy on "Star Trek," died outside Los Angeles in Woodland Hills, Calif., after a long illness. He was 79. In 2002, Paul McCartney married Heather Mills at a castle in Ireland. They have since divorced. In 2007, the final episode of "The Sopranos" aired on HBO. Thought for Today: "It is impossible to defeat an ignorant man in argument." — William Gibbs McAdoo, American government official (1863-1941). [Words for troll-feeders everywhere to remember. — Ed.]

Is that a Trabant behind the monk-on-fire? Or just one of those capitalistic French pieces of shit?
P.

Doubt if was a Trabant, not much export demand, & you can bet the Frogs put priority on dumping their industrial output on their colonies, current & former.

We'd guess Renault or Peugeot. We don't think Citroën ever made anything that couldn't be spotted as a Citroën.