Top Cat Goes To The Big Pound In The Sky

by M. Bouffant     at 19:19
The Voice Of "Top Cat" And The "Chunky" Candy Commercials Has Died
Arnold Stang was most famous for being the voice of "Top Cat" in the animated series of the '60s. 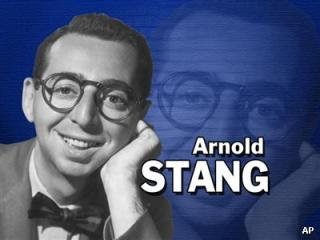 LAST UPDATED: 12/22/2009 21:00:08 ET
Boston, Mass -- He was the nerdy-looking guy most famous for being the voice of "Top Cat" in the animated series of the '60s. But there are plenty of other projects Arnold Stang is known for [sic]. He was in "It's A Mad, Mad, Mad, Mad World" and "The Man with the Golden Arm." He co-starred in Arnold Schwarzenegger's first big movie, "Hercules in New York." Stang was the voice of the Honey Nut Cheerios Bee and appeared in several commercials for the chocolate candy Chunky. He ended each ad with the phrase, "What a chunk of chocolate!" Stang has now died of pneumonia. He was 91.
Source: Associated Press

I had a Top Cat LP. It was terrific.

From The Play Skool Desk of The Childhood Memories Editor:

Top Cat always struck us as an urban Yogi Bear (w/ a gang rather than merely Boo-Boo) & as such was more of an influence on our anti-social upbringing.

Ranger Smith nothing, that Officer Dibble was a real fucking pig!