That Should Hold The Little Bastards

by M. Bouffant     at 03:40
Dick Cavett eases us all into Sat. morning, w/ memories & a little sucking up to the dead & near-dead, perhaps in anticipation of getting a better table on his arrival wherever post-existence happens. 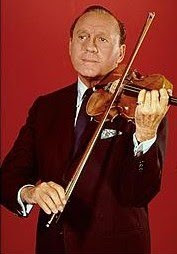 When the doors opened, the civilians all rushed out to astonish their friends with reports of whom they had met and actually spoken with.

Jack put his arm around my shoulder and in that soft voice, said, “Ya know, kid, sometimes ya jes’ wanna tell ‘em to go . . . ” And yes, he uttered them. Those two words.

Oh, the wonder of it! And the innocence of it. It’s a sweet story and only a misfit would find it dirty.

Hearing that voice, famous from childhood, that issued from our old two-minutes-to-warm-up Majestic radio, employ one of George Carlin’s “Seven Words You Can Never Say on TV” (now you can, thanks to cable) was a rare experience. More so from him, because Benny, as comedians say, “worked clean.” Cleaner, maybe, than any other giant comic. And he was smart enough to realize the shock value of a naughty word from the mouth of the former little Benny Kubelsky from Illinois.


As we sit here in our sun-filled breakfast nook, inhaling the delicious aroma from the steaming cup of coffee in our hands, looking into middle space, perhaps smiling toward the dog at our feet while we turn the pages of the paper (as if our life were an advertiser's fantasy) we are reminded of the time when we, like Mr. Cavett, had employment, & said employer, on (get this, kids, a pay 'phone, actually bolted to a wall) had no sooner spoken the phrase "10%" into the 'phone when an eavesdropping Shirley MacLaine advised him: "If that's an agent, tell him to go fuck himself." Not that Ms. MacLaine could be thought of as a paragon of innocence, but still ...

Note: We are so old (wretched, also) that we were simply amused by Jack Benny being foul-mouthed, & it wasn't until we'd copied & pasted the thing & re-read it that we remembered our own brush w/ celebrity & took the opportunity to name drop.

(Do you enjoy it as much as I do when a moralistic figure of the religious right is caught with descended trousers?)