Poke Poke
Poke Your Eyes Out! 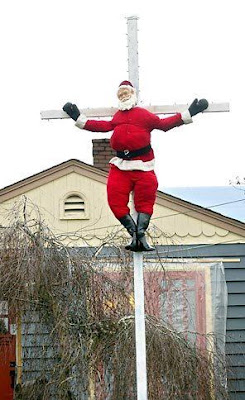 Conservative Christian groups also took offense at a recent Gap ad that made a point of giving equal time to various holidays. "As a Christian, I don't put Christmas on the same plane as winter solstice," said Carrie Gordon Earll, a spokeswoman for Focus on the Family. "It kind of felt like a poke in the eye."


Oddly enough, as someone who's as in tune w/ the planet & local star as it is humanly possible to be (while spending at least 90% of our time inside a monastic cell watching tee vee, that is) our eye feels kind of poked too: We don't put the Winter Solstice on the same level as X-mess because, among other things, your "Christmas" is a watered-down co-optation of the Winter Solstice. How's that for a poke in your damn eye, arrogant bee-yotch?

Some poor saps are old enough to remember when there was talk about "Putting the Christ back in Christmas," by which the religio-scolds of the day really meant less commercialism, more "thinkin' 'bout Jeeee-suhsss!" How did they get from that to "Put more Christmas in the commercialism, or we'll blacklist your co." w/in our lifetime? The Prosperity Gospel?

Still some old schoolers at it, though the Slate typist thinks it's something new & rising.


Then there's the rise of third-way groups like the Advent Conspiracy, which embraces the religious aspects of Christmas but rejects the consumerism surrounding it. (Watch their promo video here.) Rather than a war on Christmas, they're fighting a war for Christmas.


Either way, let's have a war!