by M. Bouffant     at 00:01
Today is Sunday, Dec. 20, the 354th day of 2009. There are 11 days left in the year. UPI Almanac.Today's Highlight in History:
On December 20th, 1803, the Louisiana Purchase was completed as ownership of the territory was formally transferred from France to the United States during ceremonies in New Orleans. [Have something a couple hundred yrs., & you just don't care as much as you used to. — Ed.]
On this date:
In 1790, the first successful cotton mill in the United States began operating at Pawtucket, Rhode Island.
In 1860, South Carolina became the first state to secede from the Union.
In 1864, Confederate forces evacuated Savannah, Georgia, as Union General William T. Sherman continued his "March to the Sea."
In 1879, Thomas Edison privately demonstrated his incandescent light at Menlo Park, N.J. [A mere 130 yrs. later, they're so old school they're about to be outlawed. — Ed.]
In 1945, the Office of Price Administration announced the end of tire rationing, effective January 1st, 1946.
In 1963, the Berlin Wall was opened for the first time to West Berliners, who were allowed one-day visits to relatives in the Eastern sector for the holidays.
In 1968, author John Steinbeck died in New York at age 66.
In 1976, Chicago Mayor Richard J. Daley died at age 74.
In 1978, former White House chief of staff H.R. Haldeman was released from prison after serving 18 months for his role in the Watergate cover-up.
In 1987, more than 4,300 people were killed when the Dona Paz, a Philippine passenger ship, collided with the tanker Vector off Mindoro island. [That's a lot of people. Typo? Perhaps. UPI claims differently. — Ed.] In 1987, nearly 1,600 people died in the Philippines when a passenger ferry was struck by an oil tanker and sank. It was the century's worst peacetime maritime disaster.
In 1989, the United States launched Operation Just Cause, sending troops into Panama to topple the government of General Manuel Noriega. 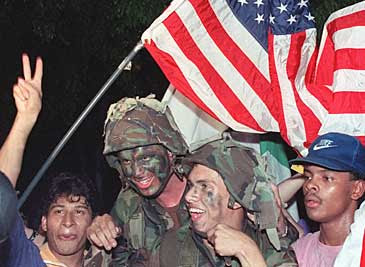 In 1994, former Secretary of State Dean Rusk died at age 85.
In 1996, astronomer Carl Sagan died at age 62.
In 1997, President Nelson Mandela stepped down as leader of South Africa's governing African National Congress. Pope John Paul II sent Christmas greetings to the Cuban people in advance of his visit to the island.
In 1998, Nkem Chukwu gave birth in Houston to five girls and two boys, 12 days after giving birth to another child, a girl. (However, the tiniest of the octuplets died a week later.)
In 1999, the Vermont Supreme Court ruled that homosexual couples were entitled to the same benefits and protections as wedded couples. Ten years ago: The Vermont Supreme Court ruled that homosexual couples were entitled to the same benefits and protections as wedded couples of the opposite sex. Country music legend Hank Snow died in Nashville, Tenn., at age 85.
In 2002, Trent Lott resigned as Senate Republican leader two weeks after igniting a political firestorm with racially charged remarks. The nation's ten biggest brokerages agreed to pay 1.44 billion dollars and fundamentally change the way they did business to settle allegations they'd misled investors by hyping certain companies' stocks. Ted Williams' eldest daughter, Bobby-Jo Williams Ferrell, dropped her objections to her siblings' decision to have the Hall of Famer's body frozen at a cryonics lab in Arizona.
In 2003, Spain's prime minister, Jose Maria Aznar, paid a surprise visit to Spanish soldiers in Iraq. Friends and relatives of Michael Jackson descended on his Neverland Ranch to show their support for the entertainer as he fought child molestation charges (Jackson was later acquitted).
In 2004, in a sobering assessment of the Iraq war, President George W. Bush acknowledged during a news conference that Americans' resolve had been shaken by grisly scenes of death and destruction, and he pointedly criticized the performance of U.S.-trained Iraqi troops. Attorneys presented opening statements in the Robert Blake murder trial in Los Angeles.
In 2005, a federal judge ruled that "intelligent design" could not be mentioned in biology classes in a Pennsylvania public school district. New York City transit workers began a three-day strike.
In 2006, acknowledging deepening frustration over Iraq, President Bush told a news conference he was considering an increase in American forces and warned that the next year would bring more painful U.S. losses. Recently sworn-in Defense Secretary Robert Gates made an unannounced visit to Iraq.
In 2007, police used chemical spray and stun guns on protesters outside a New Orleans City Council meeting where members unanimously supported demolition of 4,500 public housing units for redevelopment. Thieves broke into the Sao Paulo Museum of Art in Brazil and made off with paintings by Pablo Picasso and Candido Portinari. A British judge acquitted the only man charged with murder in Northern Ireland's deadliest terror attack: the 1998 car bombing that killed 29 people in the town of Omagh. Utah opened the bowl season with a wild 35-32 victory over the Navy Midshipmen in the Poinsettia Bowl.
In 2008, a Continental Airlines Boeing 737-500 taking off from Denver veered off the runway into a ravine, injuring 37 people. Olga Lepeshinskaya, the Bolshoi Ballet's prima ballerina for three decades during Soviet times, died in Moscow at age 92.
Today's Birthdays December 20: Actress Audrey Totter is 92. Comedian Charlie Callas is 82. Actor John Hillerman is 77. Actress Kathryn Joosten is 70. Rock musician-music producer Bobby Colomby is 65. Rock musician Peter Criss is 64. Psychic/illusionist Uri Geller is 63. Producer Dick Wolf ("Law & Order") is 63. Rock musician Alan Parsons is 61. Actress Jenny Agutter is 57. Actor Michael Badalucco is 55. Actress Blanche Baker is 53. Rock singer Billy Bragg is 52. Rock singer-musician Mike Watt (The Secondmen, Minutemen, fIREHOSE) is 52. Actor Joel Gretsch is 46. Country singer Kris Tyler is 45. Rock singer Chris Robinson is 43. Actress Nicole deBoer is 39. Movie director Todd Phillips is 39.
Born On This Date & Later Died:
Harvey Samuel Firestone, industrialist (1868); Branch Rickey, baseball executive; integrated the major leagues by signing (1945) Jackie Robinson to a contract with the Brooklyn Dodgers. (1881); Hazel Hotchkiss Wightman, athlete (1886); Susanne K. Langer, philosopher (1895); Sidney Hook, philosopher (1902).
Show Bidness History:
In 1946, the Frank Capra film "It's A Wonderful Life" had a preview showing for charity at New York City's Globe Theatre, a day before its official premiere. 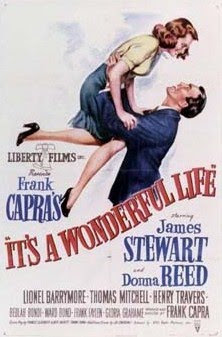 In 1958, George Harrison, Paul McCartney and John Lennon performed as The Quarrymen at the wedding reception of Harrison's brother, Harry.
In 1967, singer Ian Anderson and bassist Glenn Cornick formed Jethro Tull. Also in 1967, singer Jimmy Rodgers was beaten during a roadside attack in Los Angeles. He had to have three brain operations and had a steel plate put into his skull.
In 1973, singer Bobby Darin died during open heart surgery. He was 37.
In 1975, former James Gang member Joe Walsh joined The Eagles. He replaced Bernie Leadon, who left The Eagles for a solo career.
In 1981, the musical "Dreamgirls," which was loosely based on the career of Diana Ross and the Supremes, premiered on Broadway.
In 1986, Randy Travis joined the Grand Ole Opry.
In 1995, the members of The Drifters were forbidden to leave Guyana after a series of concerts. They owed about $4,000 in entertainment taxes.
In 1999, country music legend Hank Snow died in Nashville, Tenn., at age 85.
In 2006, Eminem and Kim Mathers were divorced for a second time. They had first married in 1999 and divorced in 2001. They remarried in January 2006 and he field [sic] for divorce again that April.
In 2007, Eddie Van Halen and Valerie Bertinelli settled their divorce.
In 2008, filmmaker Robert Mulligan ("To Kill a Mockingbird") died in Lyme, Conn., at age 83.
Thought for Today: "There are two days in the week about which and upon which I never worry. Two carefree days, kept sacredly free from fear and apprehension. One of these days is Yesterday. ... And the other ... is Tomorrow." — Robert Jones Burdette, American clergyman and author (1844-1914).