by M. Bouffant     at 00:01
Today is Thursday, Dec. 17, the 351st day of 2009. There are 14 days left in the year. (Two wks., bitchezz!) The UPI has history too!Today's Highlight in History:
On Dec. 17, 1903, Wilbur and Orville Wright of Dayton, Ohio, conducted the first successful manned, powered airplane flights, near Kitty Hawk, N.C., using their experimental craft, the Wright Flyer. 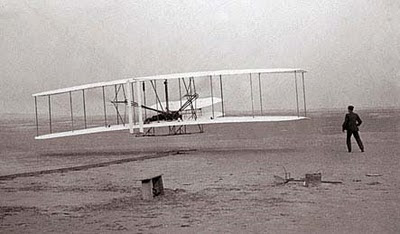 On this date:
In 1777, France recognized American independence.
In 1790, the Aztec Calendar or Solar Stone was uncovered by workmen repairing Mexico City's Central Plaza. [Is this the one that runs out soon? — Ed.]
In 1830, South American revolutionary Simon Bolivar died in Colombia. [The North Carolina tee vee station web site whence we steal this used the word "patriot" instead of "revolutionary." As a commie, & as it's hard to be a "patriot" to all of South America, we changed it even before seeing that the AP's site also uses "revolutionary." More damn media bias. — Ed.]
In 1925, Col. William "Billy" Mitchell was convicted at his court-martial in Washington, D.C., of insubordination for accusing senior military officials of incompetence and criminal negligence; he was suspended from active duty. He was awarded the Medal of Honor 20 years after his death.
In 1933, in the first NFL championship game, the Chicago Bears defeated the New York Giants 23-21 at Wrigley Field.
In 1939, the German pocket battleship Admiral Graf Spee was scuttled by its crew, ending the Battle of the River Plate off Uruguay. See the movie. It's fun! — Ed.]
In 1944, the U.S. Army announced the end of its policy of excluding Japanese-Americans from the West Coast.
In 1957, the United States successfully test-fired the Atlas intercontinental ballistic missile for the first time.
In 1967, the Clean Air Act was passed by the U.S. Congress.
In 1969, the U.S. Air Force closed its Project "Blue Book" by concluding there was no evidence of extraterrestrial spaceships behind thousands of UFO sightings.
In 1975, Lynette "Squeaky" Fromme was sentenced in Sacramento, Calif., to life in prison for her attempt on the life of President Gerald R. Ford. (She was paroled in August 2009.)
In 1979, in a case that aggravated racial tensions, Arthur McDuffie, a black insurance executive, was fatally injured after leading police on a chase with his motorcycle in Miami. (Four white police officers accused of beating McDuffie were later acquitted, sparking riots.)
In 1981, members of the Red Brigades kidnapped Brigadier General James L. Dozier, the highest-ranking US Army official in southern Europe, from his home in Verona, Italy. (Dozier was rescued 42 days later.) [We still think he should have been executed, then drawn & quartered. — Ed.]
In 1986, Eugene Hasenfus, an American convicted by Nicaragua for his part in running guns to the Contras, was pardoned and released.
In 1992, President George H.W. Bush, Canadian Prime Minister Brian Mulroney and Mexican President Carlos Salinas de Gortari signed the North American Free Trade Agreement in separate ceremonies.
In 1996, Kofi Annan of Ghana became United Nations secretary-general. 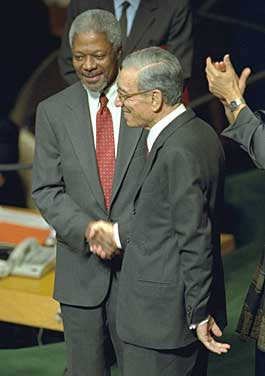