by M. Bouffant     at 00:01
Today is Saturday, Dec. 19, the 353rd day of 2009. There are 12 days left in the year. UPI version.
Today's Highlight in History:
On Dec. 19, 1843, "A Christmas Carol," by Charles Dickens, was first published in England.
On this date:
In 1732, Benjamin Franklin began publishing Poor Richard's Almanac.
In 1776, Thomas Paine published his first American Crisis essay, in which he wrote, "These are the times that try men's souls." [What times aren't? — Ed.]
In 1777, Gen. George Washington led his army of about 11,000 men to Valley Forge, Pa., to camp for the winter.
In 1813, British forces captured Fort Niagara in upstate New York during the War of 1812.
In 1907, 239 workers died in a coal mine explosion in Jacobs Creek, Pa.
In 1932, the BBC began transmitting overseas with its Empire Service to Australia.
In 1946, war broke out in Indochina as troops under Ho Chi Minh launched widespread attacks against the French.
In 1958, the U.S. satellite Atlas transmitted the first radio voice broadcast from space, a 58-word recorded Christmas greeting from U.S. President Dwight Eisenhower.
In 1972, Apollo 17 splashed down in the Pacific, winding up the Apollo program of manned lunar landings.
In 1974, Nelson A. Rockefeller was sworn in as the 41st vice president of the United States. 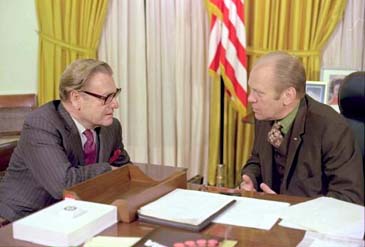 [Note well: Two of the last Republicans who were at least sane, if not the brightest bulbs in the chandelier. — Ed.]
In 1984, a fire at the Wilberg Mine near Orangeville, Utah, killed 27 people. Britain and China signed an accord returning Hong Kong to Chinese sovereignty on July 1, 1997. Also, the United States formally withdrew from UNESCO in a effort to force reform of the U.N. cultural organization's budget and alleged Third World bias. [Bogus outrage about racial stuff: It's nothing new. — Ed.]
In 1986, the Soviet Union announced it had freed dissident Andrei Sakharov from internal exile and pardoned his wife, Yelena Bonner. U.S. Attorney General Edwin Meese said U.S. President Ronald Reagan didn't know that money Iran paid for U.S. arms was going to Nicaraguan rebels.
In 1996, the school board of Oakland, Calif., voted to recognize Black English, also known as "ebonics." [See 1984. Outrageous! — Ed.]
In 1997, a SilkAir Boeing 737-300 plunged from the sky, crashing into an Indonesian river and killing all 104 people aboard. In Milwaukee, postal clerk Anthony Deculit killed a co-worker he'd feuded with, wounded a supervisor and injured another worker before taking his own life.
In 1998, President Bill Clinton was impeached by the Republican-controlled House for perjury and obstruction of justice (he was later acquitted by the Senate). 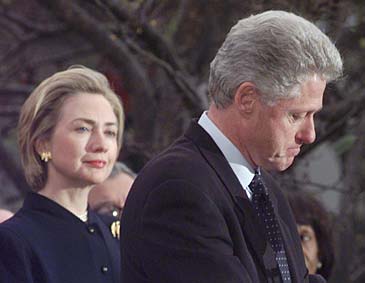 Two days after his confession of marital infidelity, Rep. Bob Livingston, R-La., told the House he wouldn't serve as its next speaker. [A-hem. — Ed.]
In 1999, space shuttle Discovery and seven astronauts roared into the night toward the crippled Hubble Space Telescope. Macau spent its last day under Portuguese control before being handed back to China, ending 442 years of colonial rule. Cleveland Browns offensive tackle Orlando Brown was ejected for pushing referee Jeff Triplette to the ground during a game against Jacksonville after accidentally being hit in the eye with Triplette's weighted penalty flag.
In 2000, the U.N. Security Council voted to impose broad sanctions on Afghanistan's Taliban rulers unless they closed terrorist training camps and surrendered U.S. embassy bombing suspect Osama bin Laden.
In 2002, Secretary of State Colin Powell declared Iraq in "material breach" of a U.N. disarmament resolution. After a prosecutor cited new DNA evidence, a judge in New York threw out the convictions of five young men in a 1989 attack on a Central Park jogger who had been raped and left for dead. Roh Moo-hyun won South Korea's presidential election.
In 2003, Muammar al-Qaddafi of Libya announced that his country would discontinue development of weapons of mass destruction.
In 2004, in Iraq, car bombs tore through a Najaf funeral procession and Karbala's main bus station, killing at least 60 people and wounding more than 120 in the two Shiite holy cities. In Baghdad, three Iraqi election officials were killed execution-style by insurgents. Time magazine named President George W. Bush its Person of the Year for the second time. Opera singer Renata Tebaldi died in San Marino at age 82.
In 2005, Afghanistan's first democratically elected parliament in more than three decades convened.
In 2006, a Libyan court convicted five Bulgarian nurses and a Palestinian doctor of deliberately infecting 400 children with HIV and sentenced them to death. (The six later had their death sentences commuted, and were transferred to Bulgaria, where they were pardoned and set free.) U.S. President George W. Bush said he would increase the number of Americans in the military to deal with terrorism worldwide. Bush acknowledged that U.S. military forces were stretched too thin.
In 2007, conservative Lee Myung-bak won the South Korean presidential election.
In 2008, citing imminent danger to the national economy, President George W. Bush ordered an emergency bailout of the U.S. auto industry. An unwavering Illinois Gov. Rod Blagojevich served notice he had no intention of quitting over his corruption arrest, declaring: "I have done nothing wrong." Militants in Gaza fired rockets into Israel as Hamas ended a six-month truce. Also in 2008, a landmark $200 billion program intended to support consumer credit will allow hedge funds to borrow from the Federal Reserve for the first time. And, Mark Felt, an FBI official who became known as the Washington Post journalists' shadowy source "Deep Throat" in the Watergate scandal, died at the age of 95. 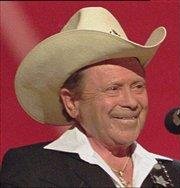 Today's Birthdays: Country singer Little Jimmy Dickens (left) is 89. Composer-lyricist Robert Sherman ("Mary Poppins") is 84. Actress Cicely Tyson is 76. R&B singer-musician Maurice White (Earth, Wind and Fire) is 68. South Korean President Lee Myung-bak is 68. Actress Elaine Joyce is 66. Actor Tim Reid is 65. Paleontologist Richard E. Leakey is 65. Rock singer Alvin Lee (Ten Years After) is 65. Musician John McEuen is 64.Singer Janie Fricke is 62. Jazz musician Lenny White is 60. Actor Mike Lookinland is 49. Actress Jennifer Beals is 46. Actor Scott Cohen is 45. Actor Robert MacNaughton is 43. Magician Criss Angel is 42. Rock musician Kevin Shepard is 41. Actress Kristy Swanson is 40. Model Tyson Beckford is 39. Actress Amy Locane is 38. Actress Rosa Blasi is 37. Actress Alyssa Milano is 37.  Football player Warren Sapp is 37. Football player Jake Plummer is 35.  Actor Jake Gyllenhaal is 29. Actress Marla Sokoloff is 29. Rapper Lady Sovereign is 24. [Whatever happened to her? — Ed.]
Others, Now Dead, Born this Date: Mary Livermore, women's suffrage leader (1820); "Pollyanna" author Eleanor Porter (1868); Ford Frick, NL president, commissioner of baseball (1894); Sir Ralph Richardson, actor (1902); Leonid Brezhnev, political leader (1906); Jean Genet, a pioneer in the theater of the absurd (1910); Edith ["The Little Sparrow"] Piaf, cabaret singer (1915).
Today In Entertainment History December 19In 1955, Carl Perkins recorded "Blue Suede Shoes" at Sun Records in Memphis.
In 1957,Meredith Willson's musical play "The Music Man," starring Robert Preston, opened on Broadway.
In 1975, the C.W. McCall single "Convoy" went gold in the US.
In 1980, Dolly Parton's first movie, "9 to 5," opened nationwide.
In 1985, country singer Johnny Paycheck was arrested for shooting a man during a fight in Hillsboro, Ohio. He was released from jail in 1991.
In 1991, Oliver Stone's controversial film "JFK" premiered in Dallas, where President Kennedy was assassinated in 1963.
In 1995, one person was killed and several others injured on the set of the Disney movie "Gone Fishin'." A boat used in a stunt went out of control and landed on a group of people.
In 1997, the movie "Titanic" opened. It was the most expensive movie ever made.
In 1999, Actor Desmond Llewelyn, who'd starred as the eccentric gadget expert Q in a string of James Bond films, was killed in a car crash in East Sussex, England; he was 85.
In 2000, musician Pops Staples of The Staple Singers died at his home outside Chicago at the age of 84. He had been recovering from a concussion suffered four weeks earlier. That same day, guitarist Rob Buck of 10,000 Maniacs died of complications from liver failure. He was 42.
Thought for Today: "I never could see why people were so happy about Dickens' 'A Christmas Carol' because I never had any confidence that Scrooge was going to be different the next day." — Dr. Karl Menninger, American psychiatrist (1893-1990).