by M. Bouffant     at 00:01
By The AP - 1 hour 53 minutes ago
Today is Sunday, Dec. 21, the 356th day of 2008. There are 10 days left in the year. Winter will arrive at 7:04 a.m. Eastern time. The Jewish Festival of Lights, Hanukkah, begins at sunset.
Today's Highlight in History:
On Dec. 21, 1620, Pilgrims aboard the Mayflower went ashore for the first time at present-day Plymouth, Mass.
On this date:
In 1804, British statesman Benjamin Disraeli was born in London.
In 1940, author F. Scott Fitzgerald died in Hollywood, Calif., at age 44.
In 1945, Gen. George S. Patton died in Heidelberg, Germany, of injuries from a car accident.
Sixty years ago, in 1948, the state of Eire, or Ireland, passed an act declaring itself a republic.
Fifty years ago, in 1958, Charles de Gaulle was elected to a seven-year term as the first president of the Fifth Republic of France.
Forty years ago, in 1968, Apollo 8 was launched on a mission to orbit the moon.
In 1971, the U.N. Security Council chose Kurt Waldheim to succeed U Thant as Secretary-General.
In 1976, the Liberian-registered tanker Argo Merchant broke apart near Nantucket Island, off Massachusetts, almost a week after running aground, spilling 7 1/2 million gallons of oil into the North Atlantic.
Twenty years ago, in 1988, 270 people were killed when a terrorist bomb exploded aboard a Pam Am Boeing 747 over Lockerbie, Scotland, sending wreckage crashing to the ground.
Ten years ago: Israel's parliament voted overwhelmingly for early elections, signaling the demise of Prime Minister Benjamin Netanyahu's ailing hard-line government. A Chinese court sentenced two dissidents (Xu Wenli, Wang Youcai) to long prison terms for trying to organize an opposition party. (Xu was released in December 2002; Wang, in March 2004.)
Five years ago: The government raised the national threat level to orange, indicating a high risk of terrorist attack. (It was lowered back to yellow on Jan. 9, 2004.) More than 150 people were killed in mudslides in the Philippines. Soviet diplomat Oleg Troyanovsky died at age 84.
One year ago: A suicide attacker detonated a bomb at a mosque outside the home of Pakistan's former interior minister, killing at least 50 people.
Today's Birthdays: Country singer Freddie Hart is 82. Actor Ed Nelson is 80. Talk show host Phil Donahue is 73. Movie director John Avildsen is 73. Actress Jane Fonda is 71. [Here she is in Cleveland, Oh., a bit over 38 yrs. ago, resisting. 5' 8" & 126#. Mm. — Sexist Pig Editor.] 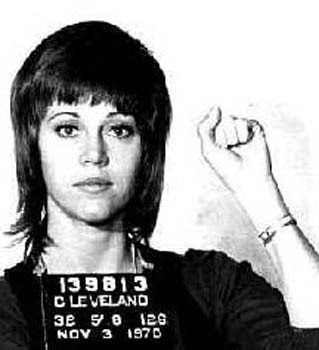 Singer Carla Thomas is 66. Musician Albert Lee is 65. Conductor Michael Tilson Thomas is 64. Actor Samuel L. Jackson is 60. Movie producer Jeffrey Katzenberg is 58. Singer Betty Wright is 55. Tennis Hall-of-Famer Chris Evert is 54. Actress Jane Kaczmarek is 53. Country singer Lee Roy Parnell is 52. Entertainer Jim Rose is 52. Actor-comedian Ray Romano is 51. Country singer Christy Forester (The Forester Sisters) is 46. Rock musician Murph (The Lemonheads; Dinosaur Jr.) is 44. Actor-comedian Andy Dick is 43. Rock musician Gabrielle Glaser is 43. Actor Kiefer Sutherland is 42. Actress Karri Turner is 42. Actress Khrystyne Haje is 40. Actress Julie Delpy is 39. Singer-musician Brett Scallions is 37.
Thought for Today: "Many human beings say that they enjoy the winter, but what they really enjoy is feeling proof against it." — Richard Adams, English author.
And in the World of Entertainment on This Date:
On December 21st, 1933, five-year-old Shirley Temple signed a movie contract with Fox. Her age was later changed to make her appear a year younger.
In 1937, Disney released the movie "Snow White and the Seven Dwarfs," the first full-length animated film in Technicolor.
In 1964, the book "Ode to a High-Flying Bird" by Rolling Stones drummer Charlie Watts was published. It was a tribute to jazz great Charlie Parker.
In 1968, Janis Joplin made her first appearance after leaving Big Brother and the Holding Company. She performed in Memphis at the second annual "Yuletide Thing" event sponsored by Stax-Volt Records. Also in 1968, Crosby, Stills and Nash performed together for the first time.
In 1970, Elvis Presley paid a visit to President Nixon at the White House.
In 1979, Chicago, The Eagles and Linda Ronstadt played the first of two concerts to raise campaign money for California governor Jerry Brown, Ronstadt's then-boyfriend.
In 1991, actress Jane Fonda married broadcasting executive Ted Turner on his ranch in Florida. It was her 54th birthday. They've since split up.
In 1996, singer Tony Bennett was rushed to a hospital in Washington after his hernia erupted while visiting the White House for a holiday dinner. He had to have emergency surgery but recovered without problems. Also in 1996, singer Lionel Richie married former dancer and fashion designer Diane Alexander in New York.
In 2005, Elton John and his longtime partner, David Furnish, held a civil union ceremony in Windsor, England, the first day that same-sex partnerships became legal in Britain. Also in 2005, singer Howie Day was arrested for rowdy behavior on a flight from Dallas to Boston. He was sentenced to probation and rehab and was ordered to write letters of apology to the crew and passengers. [Who the fuck is Howie Day? — Ed.]

Labels: Telebision, The Dialectic, They Call It Music, Today In History, Today's Birthday