There You Have It

by M. Bouffant     at 02:23
The incontrovertible evidence is in: Barack Obama, the 44th President-in-waiting, is, indeed, Muslim. What newer proof could we have? This! Now deny it, radical progressive Unreal Americans!!

(CNN) — While President-elect Barack Obama will certainly be making history when he takes the oath of office on January 20, he'll also be repeating it -- by placing his hand on the same Bible Abraham Lincoln used during the inauguration of 1861. 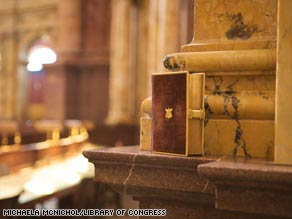 (The 1861 Lincoln Inaugural Bible against the backdrop of the Main Reading Room of the Library of Congress.)
The Constitution does not require presidents to be sworn in on a Bible, though almost every chief executive since George Washington has chosen to do so.

As you know, the chidren of Ithaka have been un po
arrabbiati recently. Anger ripples cross the sea and the bambini in Barcelona also set fire to the wicked banks and trash cans (a metaphor, perhaps??)

But they will probably stop for Christmas. Sigh.

I remembered, from many years ago, a book of poems. From the times of the colonels.

This is part of "Ithaka" by Constantine P. Cavafy

As you set out for Ithaka
hope your road is a long one,
full of adventure, full of discovery...

Hope your road is a long one.
May there be many summer mornings when,
with what pleasure, what joy,
you enter harbors you're seeing for the first time;
may you stop at Phoenician trading stations
to buy fine things,
mother of pearl and coral, amber and ebony,
sensual perfume of every kind-
as many sensual perfumes as you can;
and may you visit many Egyptian cities
to learn and go on learning from their scholars.

Keep Ithaka always in your mind.
Arriving there is what you're destined for.
But don't hurry the journey at all.
Better if it lasts for years,
so you're old by the time you reach the island,
wealthy with all you've gained on the way,
not expecting Ithaka to make you rich.
Ithaka gave you the marvelous journey.
Without her you wouldn't have set out.
She has nothing left to give you now.

And if you find her poor, Ithaka won't have fooled you.
Wise as you will have become, so full of experience,
you'll have understood by then what these Ithakas mean.